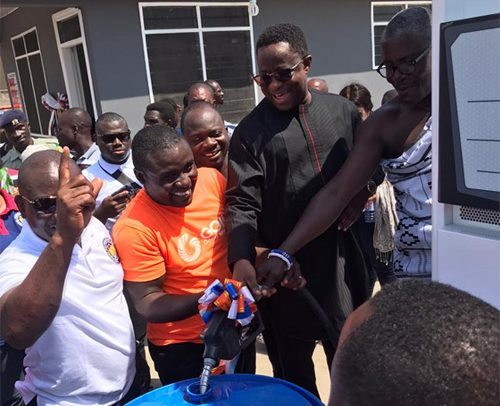 THE NATIONAL Petroleum Authority (NPA) has handed over standard premix retail outlets to fishermen in some six fishing towns.

These include Winneba, Komenda, Apam Manford (all in the Central Region), Djameni in the Volta Region, James Town in the Greater Accra Region and Shamaa Adjoa in the Western Region.

Speaking at the handing over of the Winneba premix outlet, Chief Executive of NPA, Alhassan Tampuli, said the construction of the premix retail outlets was a demonstration of NPA’s commitment to improving standards and safety in the petroleum downstream industry.

According to him, the construction of the premix retail outlets was fully funded by the NPA.

Subsequently, the NPA nominated Ghana Oil Company Limited (GOIL) to spearhead the construction and operation of the outlets.

“It is indeed regrettable to note that since that accident in Brawire in 2012, there has not been any significant improvement in the handling of premix at the landing beaches in spite of the ongoing education.”

“In May, this year, it was reported that four persons lost their lives in another premix fuel explosion at Kormantime in the Mfantsiman Municipality of the Central Region,” he noted.

The construction of the retail outlets commenced in 2015 between NPA and GOIL to provide safe and decent retail outlets aimed at eliminating the safety risk posed by the makeshift premix retail outlets along all the landing beaches across the country.

Minister of Energy, John Peter Amewu, in a statement, indicated that premix fuel distribution had been challenging because of the subsidies on the product, and whenever there were subsidies, the distribution of the product tended to create rents, and when it created rents, all sorts of people came in the middle and the fishermen who were the ultimate beneficiaries did not even get the product because the products were smuggled to non-fishermen.

“These other people who are crooks in the industry tend to hoard the product and sell them later at exorbitant prices to our fisher folks or use it to adulterate gasoline as a result of the significant price differentials between these products due to subsidies,” he said.

The current subsidy on premix fuel is 63% of the full price and this has risen from about 43% in January 2017.