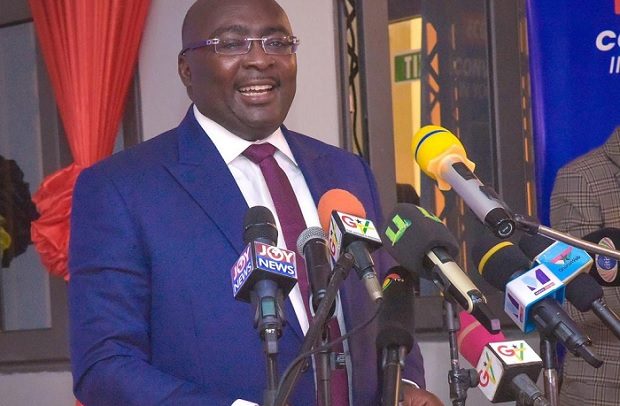 Vice President, Dr. Mahamudu Bawumia, has disclosed that the President Nana Akufo-Addo’s administration has completed a total of 8,746 Infrastructure Projects over the past three and half years.

He made this known at the Town Hall Meeting and Results Fair on Tuesday evening, August 18, 2020 at the Academy of Arts and Sciences in Accra.

The goal of the Town Hall Meeting and Results Fair, he said, is to share with Ghanaians what the President Nana Akufo-Addo’s administration has done within the infrastructure space, the impact on households in the beneficiary communities, districts, regions, and what they mean in the broader context of Ghana’s development.

According to Dr. Bawumia, “over the past 3 and half years, we have implemented different infrastructure programs across sectors.”

He said “in total, about 17,334 individual projects have been started since January 2017.

“We have completed a total number of 8746 projects throughout the country,” he indicated.

He added that “a further 8,588 projects are at different stages of completion throughout the country.”

According to him, “this is consistent with our strategic orientation to ensure the development of broad base, wide scale infrastructure, taking place in every district across the country instead of a few big infrastructure projects in few cities.”

The Vice President listed the various projects as presented below

Improvement of road infrastructure has been a major priority for this Government, he stated, adding that “on assumption of office, we were met with protests across the country about the poor state of the road network.

“We have implemented several initiatives to improve the road network of the country to enhance economic activities of citizens and to improve access and living conditions of our people”, he stressed.

He reiterated that “we have declared this year as the Year of Roads.”

According to him, “in total, we have since 2017 undertaken a total of 1,927 road projects across the country.”

“Out of that, 1,307 of them are completed while 620 are currently under construction,” he said.

According to him, Government was constructing four interchanges.

Among the several other projects he spoke about are those in the Agriculture sector including One Village One Dam; Health Sector including the constructions ot CHPS compounds and hospitals, among others.

Making reference to www.deliverytracker.gov.gh, he said Ghana was the only country in Africa that had implemented a publicly accessible delivery tracker for its infrastructure projects.