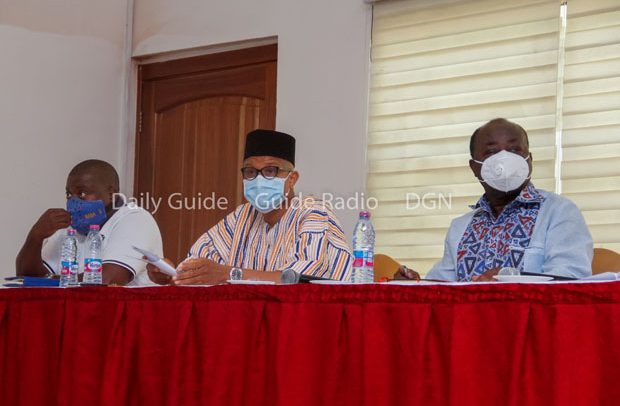 From left: Nana B, Mustapha Hamid and Freddie Blay at the media briefing

The National Chairman of the New Patriotic Party (NPP), Freddie W. Blay, has accused the former President and flagbearer of the opposition National Democratic Congress (NDC) of intentionally sowing seeds of ethnocentrism ahead of the December general election.

According to him, Mr. Mahama and his NDC are pushing ethnocentric agenda because they do not have any campaign message for Ghanaians.

He said the stock-in-trade of the former President and his party was to always play the tribal card and divide the country because of political power as he and his party had started doing by desperately pitting, especially Ewes, and other non-Akan tribes against the ruling NPP as a party that hates such non-Akan tribes.

Mr. Blay levelled the tribalism accusation against the former President at a press conference yesterday in Accra to parry such non-existent feud between the NPP and Ewes.

“We in the NPP choose to focus on the things that unite us as a nation rather than the things that divide us along ethnic lines,” he said, stressing that the ‘hate-for-votes’ campaign by the former President will fall flat in the face because Ghanaians are more discerning now.

He indicated that if NPP administration were to be against certain tribes in the country, it would not boldly implement proactive policies like the Free SHS, Planting for Food and Jobs, National Builders Corps, free water and electricity for the benefit of all Ghanaians irrespective of tribe or political background.

“Does Mahama know how many families in the Volta Region are benefitting from the Free SHS and other social intervention policies by the Akufo-Addo government?” he queried the former President.

He said while the NDC flagbearer was diabolically accusing the NPP of using the military to intimidate residents of the Volta Region, particularly in the Ketu South Constituency, it is the same constituency and region that had recorded the highest rate of registration.

According to him, Ketu South has recorded over 132,000 voters in the current registration exercise and is likely to hit about 150,000 by the end of the whole exercise, which is far more than the previous voter population of 149,219, and so the accusation of the military intimidating qualified Ghanaians in the Volta Region by the former President and his apparatchiks is a mere propaganda to paint the ruling party black.

He said the Volta Region had even overtaken the Eastern Region, where the President comes from, in terms of rate of registration at the end of phase five of the exercise by recording 816,069 as against previous voter population of 999,368.

“Ever since the NDC flagbearer visited the Volta Region, starting with Aflao in Ketu South on Saturday July 11, (a trip which took him to Akatsi South, Ketu North, South Tongu and Ho), we have observed with shock and dismay as the NDC suddenly changed direction to spread falsehood that the Akufo-Addo government was pushing an anti-Ewe agenda to disenfranchise people from the Volta Region,” the National Chairman said.

“As Ghanaians, we have to be proud of having a successful, transparent and constitutionally sound voters’ register,” he said, adding that “Ghanaians have shown the world what we are made up of, and we stand as an example of how to preserve and protect our democracy in challenging times under the direction of a bold and caring leader like Nana Akufo-Addo.”