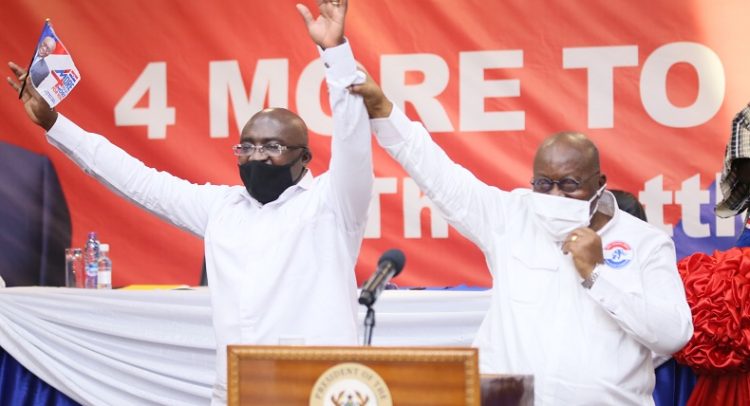 PRESIDENT Nana Addo Dankwa Akufo-Addo accepted the ruling New Patriotic Party (NPP) nomination on Saturday to seek re-election in the December presidential election, and he did not waste time in throwing jabs at ex-President John Dramani Mahama who is staging a comeback.

With the acclamation of President Akufo-Addo by the NPP as its flag bearer, it is going to be a third showdown between him and the opposition National Democratic Congress (NDC) leader, Mr. Mahama, whom he whipped at the polls in 2016 as incumbent.

After the acclamation, the President did not also waste time in naming his vice, Alhaji Dr. Mahamudu Bawumia, an economic gem, as his running mate for the fourth time.

In a subtle jab at the NDC flag bearer, President Akufo-Addo said the Presidency is a serious office which does not need some experiment and that Ghanaians deserve better leadership.

“We are told that those who were responsible for the worst economic performance of the past thirty (30) years have learnt their lessons and seek another opportunity to correct their mistakes.”

“Dare I ask: should the Presidency be for experiments? Surely not! You, the Ghanaian people, deserve better, and you will get better leadership on 7th December, with four more years for Nana and the NPP to do more for you,” he fired amid cheers from a crowd of carefully selected party leaders due to the Covid-19 restrictions.

“We grow the economy; they shrink the economy.  We create the properly regulated, enabling atmosphere for businesses to flourish; they allow chancers and speculators to lure citizens into putting monies into dodgy enterprises,” the President said.

“They bring our banks and financial services to near collapse, and we have to clean up, shore up and restore confidence. They plunge us into DUMSOR; we keep the lights on. They look clueless, as hundreds of thousands of Ghana’s children exit school at JHS; we bring Free SHS and Free TVET to prepare our children to face life.

“They resort to crude language when faced with difficult arguments; we raise the level of public discourse,” the President said in what looks like a direct response to the ex-President, who recently accused the NPP government of being desperate and seeking to “exclude a section of Ghanaians who they suspect may not renew their mandate at the polls.”

Mr. Mahama had said after the Supreme Court had affirmed the exclusion of the old voters’ ID card from the upcoming compilation of the new voters’ register that “we have been very clear in our minds that the decision to compile a new voters’ register was in pursuit of this long-held agenda, hence our efforts to stop the wholesale attempt to exclude vast sections of our population from the process to determine who leads them.”

However, President Akufo-Addo stated that “demagogic pronouncements about love of the masses” are deceptive and veiled pep talks that do not put food on the table and send a child to school.

“The demagogic pronouncements about your so-called love of the masses do not put food on the table; do not send the child to school; do not guarantee access to good healthcare; do not assure the pensioner the value of his pension. We do not believe in pitting the rich against the poor, or the poor against the rich,” he added.

According to him, members of the NPP, which espouses the development of the country and of the individual as part of its foundational beliefs, believe in helping every Ghanaian to climb up the ladder of progress.

“We have been consistent with this, not just in words, but in deeds,” he noted.

The President said the NPP owes it to itself and the nation to decisively win the election in December and also to make sure that it keeps the economy on track “and not in the hands of people who will run it into the ground again.”

“We have to win the election to see our many projects through to a conclusion. We dare not leave the many factories coming up under our 1D1F scheme to be truncated.

President Akufo-Addo used the opportunity to appeal to all eligible Ghanaians, including members and sympathizers of the NPP, to go out and register when the Electoral Commission (EC) begins the compilation of the new voters’ register on June 30.

“Last Thursday, the Supreme Court, presided over by the Chief Justice, by a unanimous decision of the seven-member panel, settled all the issues surrounding the voters’ register and affirmed the right of the Electoral Commission to proceed with the compilation of a new register, in accordance with the provisions of C.I. 126. The road has now been cleared for the Electoral Commission to proceed.

“I am calling on every member and sympathizer of the New Patriotic Party and, indeed, on all eligible Ghanaians, no matter what party they belong to, if any, to go out and register, so that they can exercise their civic responsibilities on 7th December 2020 to elect a government of their choice in a free, fair, peaceful and transparent election,” he said.

“The pandemic, notwithstanding, we have to strengthen Ghanaian democracy. A united NPP, working under my leadership in tandem with my brilliant, resourceful, four-time running mate, Vice-President Alhaji Mahamudu Bawumia, who has just been resoundingly acclaimed by the National Council; the man who, consistently sends alarm and shivers down the spine of our opponents, can, in all humility, lead Ghana and the Ghanaian people to take this giant step forward,” he added.

“Let us work hard together for a great victory on 7th December 2020 and embrace the future and our destiny. The December 2020 presidential race represents, probably, the clearest of choices ever for the Ghanaian people to make.

“And, why do I say so? It is because 2020 is between the current President and the President who was voted out in the last contest. It is about leadership. It is about integrity. It is about the performances of the two men when given the opportunity by the Ghanaian people to lead.

Dr. Bawumia expressed his profound gratitude and appreciation to President Akufo-Addo for the honour of reaching out again to select him for the fourth time to serve as his running mate.

“This day is historic because it has never happened in the history of our country that a presidential candidate will select the same running mate four times in a row! The president selected me in 2008, 2012, 2016, and now in 2020,” he said.

“What can I say more in appreciation to all the members and sympathizers of the NPP from polling station, through the constituency, to regional and national level? You have loved me, cared for me, appreciated me. I say God bless you all,” he intimated.

Dr. Bawumia said the best running mate in the world cannot make a difference if the President is indecisive or incompetent, and added that President Akufo-Addo had shown leadership in all areas and, therefore, needed a second term to continue with the good works.

He took a swipe at the NDC on the party’s haste to go public with any issues without a thorough research and hit back at criticism that the NPP had not performed.

Dr. Bawumia referred to criticisms from the NDC’s campaign on the economic performance of the NPP government as uninformed and entreated elements of the party to get better informed on national issues before going to town with it.

“Mr. Chairman, I know they don’t read but I entreat them to take a look at the data to get better informed on our performance in office vis-à-vis theirs. They should not only read the data but they should also try to understand it so that they don’t try and mislead Ghanaians like their Mosquito General Secretary tried to do after the verdict of the Supreme Court on Thursday,” he said.

“I stand here today because of the sacrifices of my family ? my departed father Mumuni Bawumia and my mother Hajia Mariama Bawumia, my dear wife Samira, Alhaji Aliu Mahama, my children, my brothers and sisters, my departed dear friend and brother Kwabena Boadu and my entire family. I thank you all very much,” he added.