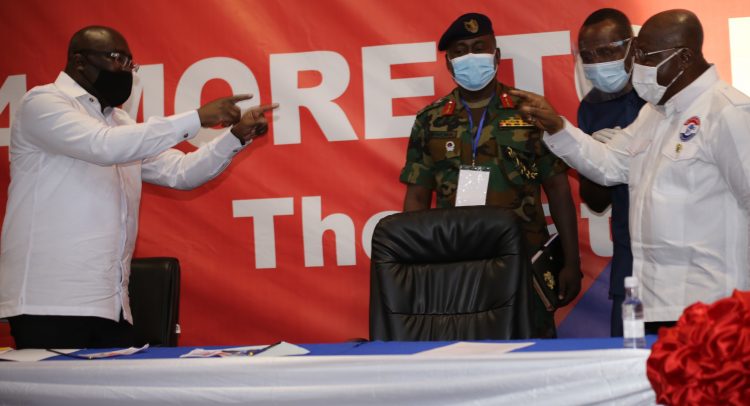 THE DESIRE of President Nana Addo Dankwa Akufo-Addo to have his mandate renewed on December 7 to enable him to complete the works he has commenced has been given a massive boost.

Vice-President Dr. Mahamudu Bawumia, who has once again been nominated as President Akufo-Addo’s running mate on the ticket of the New Patriotic Party (NPP) for the December general election, has vowed to give off his best to help his boss retain political power.

“Mr. President, you have chosen me for the fourth time, and Insha Allah the people of Ghana will give you four more to do more,” Dr. Bawumia stated, attracting wild applause from his audience during the acclamation of the President last Saturday.

He was addressing NPP members during the official endorsement of ‘Nana Akufo-Addo/Bawumia’ ticket for the NPP in the upcoming December general election. The event was held under strict Covid-19 protocols.

Beaming with smiles, Dr. Bawumia wholeheartedly thanked President Akufo-Addo for having faith and confidence in him by choosing him as his running for a historic four consecutive times.

“This day is historic because it has never happened in the history of our country that a presidential candidate will select the same running mate four times in a row. The President selected me in 2008, 2012, 2016, and now 2020. I want to express my profound gratitude and appreciation to President Akufo-Addo for the honour of reaching out again to select me for the fourth time to serve as his running mate…” he said.

According to the Vice-President, he would make sure that the confidence reposed in him by the President would not be in vain, reiterating his readiness to partner with his boss (the President) to win the presidential election.

“He easily could have dropped me in 2012 and 2016, but he stuck with me, and I am so honoured that he did, so I am eternally grateful,” Dr. Bawumia, who could not hide his deep love for President Akufo-Addo, indicated.

“I would never take the trust and loyalty he has reposed in me for granted and will continue to do everything in my capacity to support him in the execution of his mandate as the President,” he stressed.

Dr. Bawumia showered plaudits on President Akufo-Addo for being a unique and a visionary leader, indicating that he was particularly thrilled by the President’s consistency and his strong will to succeed.

“Ladies and gentlemen, this commitment tells you about the man Nana Addo Dankwa Akufo-Addo. He is a strong leader, a caring leader, a God-fearing leader, a trustworthy leader and a consistent leader,” he opined.

According to him, he is not surprised that President Akufo-Addo’s administration has achieved more in its first term in political office, pointing out that the President is always focused and he cannot be distracted.

Dr. Bawumia recounted that President Akufo-Addo had consistently stated categorically that politics is just an avenue for one to faithfully and selflessly serve the country to defeat poverty and hardship and attain prosperity.

He, therefore, said his nomination as President Akufo-Addo’s running mate clearly is a call on him and a privilege to help the NPP to retain power first and secondly to sacrifice his all to help better the lives of the citizenry.

“Mr. Chairman, I share the view of President Akufo-Addo that politics is a call to service. It is about serving your country and delivering concrete results that improve on the welfare of your fellow citizens with selflessness, dedication, honesty, transparency and with the utmost integrity.

“I believe that an opportunity to serve Ghana is an opportunity and a privilege to serve all of Ghana, regardless of ethnicity, gender, religion, education, among others,” Dr. Bawumia pointed out.

He said the NPP needed a strong and united front in order to easily win the upcoming presidential and parliamentary elections with an avalanche of votes to make a clear statement to their opponents that indeed the NPP is the best political party to rule the state.

“I am, therefore, acutely aware of the sacred responsibility that has once again been entrusted to me by President Nana Addo Dankwa Akufo-Addo and our great party,” Dr. Bawumia stated.

“It is a responsibility I will execute with utmost integrity, respect for our elders, members of our party and members of other political parties,” he stressed, adding that the party requires oneness in order to retain power again.

“Mr. Chairman, it is our collective responsibility as members of the ‘Kukrudu’ family and as Ghanaians to ensure that the sacrifices of these great men and women would not be in vain,” the Vice-President added.