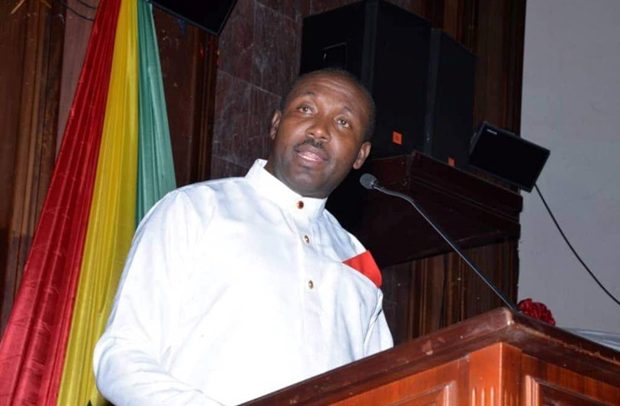 Mr. Boadu speaking at the event chaired by former President Kufuor and attended by President Akufo-Addo, ministers of state, among others.

THE RULING New Patriotic Party (NPP) has joined in the celebration of the 40th anniversary of the passing of the former Prime Minister of Ghana in the 2nd Republic, Dr. Kofi Abrefa Busia, reaffirming its commitment to his political values and ideals.

As a political party, the NPP takes its root from the Progress Party which was co-founded by Dr. Busia and Chief Dombo.

Speaking at the 40th anniversary celebration lecture on Tuesday at the Accra International Conference Centre, General-Secretary of the NPP, John Boadu, gave thanks to the likes of Dr. Busia who laid a rich tradition for the NPP as a political party.

He stated: “Ultimately, we are a formidable political party today of the Busias”, describing Dr. Busia as a “celebrated nationalist.”

He said the NPP is today the only political party in Ghana “with rich tradition” because of its link to Dr. Busia and others.

“It is thus much evident that the man whose legacies we are celebrating today is one of the finest founding fathers of our political tradition. He is the foremost political leader of our tradition whose stupendous leadership brought our tradition to power for the first time,” he added.

Touching on the legacies of Dr. Busia who was born on July 11, 1913, and left his loved ones, friends and political partners upon his death on August 28, 1978, Mr. Boadu said “Dr. Busia’s unwavering commitment to serving country particularly ordinary members of the Ghanaian society is exceedingly remarkable and worth mentioning.”

This commitment, as most of you would recall, he said, “found expression in his famous inaugural address at the Independence Square on October 1, 1969, as Ghana’s Prime Minister in the Second Republic, which also had His Excellency Edward Akufo-Addo, the father of our current President as the nation’s President.”

The wellbeing of the ordinary Ghanaian, according to Mr. Boadu, was therefore at the heart of the Busia administration, which did so much to provide decent livelihood to the citizens of our country particularly the rural folks.

“Indeed, one of the greatest achievements of Dr. Busia is in the area of rural development, which was his priority. He was humble, hardworking, disciplined, visionary and very passionate about the welfare of the ordinary people,” he said, adding “in line with his commitment at raising the living standards of the rural dwellers, Dr. Busia established for the first time in our history, the Ministry of Social and Rural Development which oversaw the provision of good drinking water, electricity and health facilities for rural communities in the country.”

NDC’s Bare-Bone Economy - Was It Man-Made Or Dead-Goat-Made?