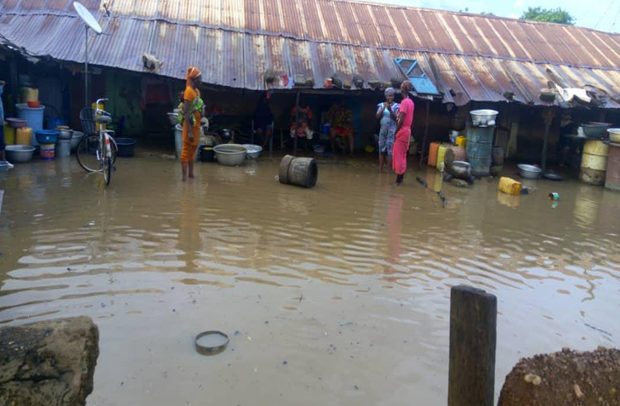 A flooded house in the Northern Region

The death toll resulting from the spillage of the Bagre dam coupled with heavy rains in the Northern Region has risen to five so far.

The first two deaths to be recorded, a 13 year old boy and a 4-year old girl, were reported to have drowned in the floodwater at Moaduri district and Walewale.

DAILY GUIDE gathered that the 4 year old girl met her untimely death when she tried to cross a river after a heavy downpour.

A pregnant woman from a community called Chama in the Central Gonja district of the Northern Region got drowned as well.

Information gathered indicates that the pregnant woman who was with her husband was going for a medical care and in their attempt to cross a bridge which was almost submerged by the flood, fell into the water. The husband, however, managed to swim to safety but the wife could not.

Another incident that occurred at Kanshegu in the Savelugu Municipality was a collapsed building that killed one person during a heavy downpour.

The same incident happened at Pong-Tamale, in which one person lost his life bringing the total number of deaths to five.

According to Abu Adams, DCE for Moaduri, over 300 inhabitants of one of the affected communities have been displaced with large tracts of farmlands and crops destroyed.

He observed that, the time has come to find a lasting solution to the problem because the continuous provision of relief items to victims any time the floods occur, though it is helpful, cannot be the way forward.

“It will do us a lot of good to construct a dam to store the excess water from the Bagre dam anytime it is opened and it spills over; for that is the only way we can really stop this annual deaths and loss of property,”  he opined.

The DCE pointed out that what is needed presently in the community is healthcare for the affected families and individuals.

“The over 300 displaced victims are being accommodated by friends, relatives and neighbors.”

It is estimated that over 8,000 homes in the Northern Region have been badly displaced due to the spillage and heavy downpour.

Pupils can no longer go to school, farmers have lost their farms while buildings and property have been destroyed.

The affected people are calling on government, NGOs, philanthropists and concerned individuals to come to their aid.