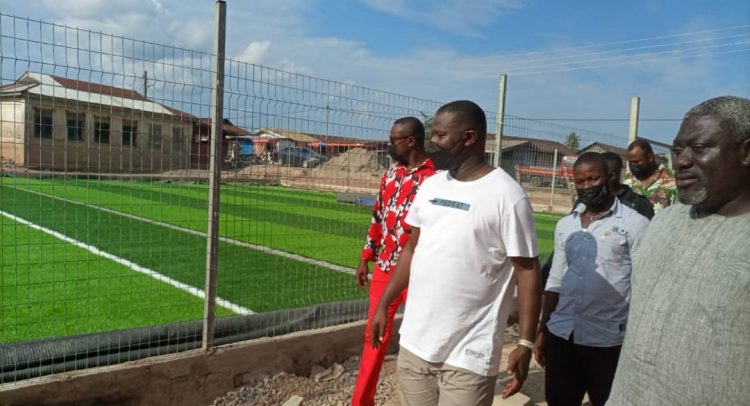 Annoh-Dompreh inspecting one of the pitches under construction

The Majority Chief Whip, also a Member of Parliament for Nsawam/Adoagyiri in the Eastern Region, Frank Annoh-Dompreh through his efforts has announced the construction of three astroturf pitches at different locations as part of the One Constituency, One AstroTurf initiative for his constituents.

These astroturf pitches expected to be completed before the end of this year are being handled by Wembley Sports Construction Limited will house a pitch, wash/changing rooms, spectator stands, panel mesh fencing, and a floodlight.

The Member of Parliament of the area, on Saturday, embarked on a tour to inspect the progress of work on the pitches.

He first visited the Adoagyiri Astroturf pitch which is at 80% completed. These projects are being undertaken by the youth in the area as a source of employment.

Frank Annoh-Dompreh explained that the entire community looks forward to its successful completion.

After the inspection of the Adoagyiri pitch, he said” this is one of three Astroturf pitches dotted around the Constituency, adding that “I’m determined to see to the completion of a 4th one before the year ends”.

The MP also described the facility as a world-class facility not only for soccer but other recreational and religious activities.

The Majority Chief Whip noted that the pitches would serve as a big platform for the youth in the area to showcase their talents and also equip them with the needed skills to compete with the rest of the world.