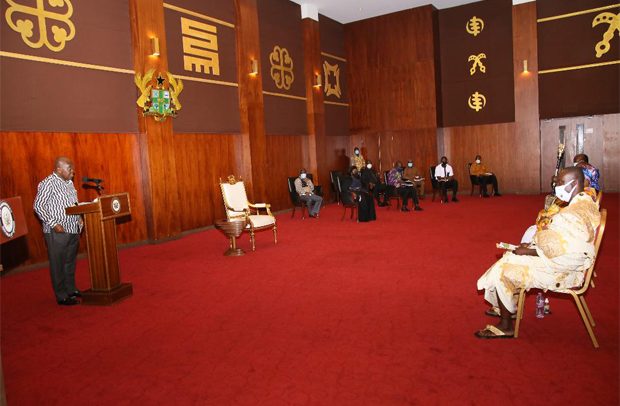 President Akufo-Addo speaking to the delegation from Nsoatre traditional area at the meeting. Picture by Gifty Ama Lawson

The chiefs and people of Nsoatre Traditional Area in the Bono Region have appealed to government to consider siting the Sunyani West District Hospital at Nsoatre instead of Odumase.

It follows the government’s decision to construct a hospital each in all district assemblies across the country.

They claim Odumase, which is the existing the district capital, is already surrounded by several hospitals—including the Sunyani Municipal Hospital and the Fiapre SDA Hospital—and for that matter, adding another one will amount to depriving Nsoatre of a befitting hospital.

“Odumase is fortunate to be surrounded by four major hospitals; the Sunyani Municipal Hospital which is just six minutes drive away; the Fiapre SDA Hospital, which is located in Fiapre but also just about seven minutes drive; and the Sunyani Regional Hospital that serves the entire region is even located on Odumase stool lands and just about two kilometres, which is about eight minutes drive,” the Henekrom Hene, Nana Hinneh Asumah I, said when he spoke on behalf of Nana Amoah Appiah II, the Nsoatre Nifahene, and acting President of the Nsoatre Traditional Area, when they called on President Akufo-Addo at the Jubilee House on Friday.

They, therefore, asked government to rethink its decision to site the new district hospital at Odumase and consider Nsoatre, which is in dire need of one.

President Akufo-Addo received the request in good faith and indicated his government’s willingness to look into the issue to arrive at a decision.

In the event that the siting of the hospital cannot be reviewed, he said his administration would look into the possibility of upgrading existing health facilities in the Nsoatre Traditional Area to bring them up at par or at a level of equity with those in Odumase and other surrounding areas in Sunyani.