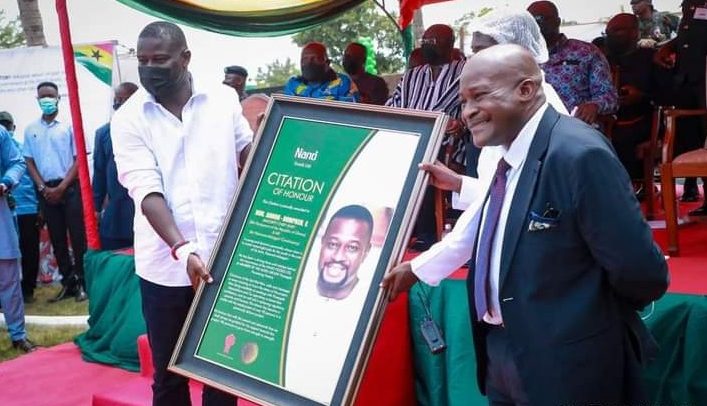 The MP receiving the citation

THE Majority Chief Whip and also MP for Nsawam-Adoagyiri in the Eastern Region, Frank Annoh-Dompreh, has indicated that the Nsumia disposal landfill site, located in the Nsawam-Adoagyiri off the Accra-Nsawam highway, which is posing health hazard, will soon be converted into energy.

According to the Nsawam MP, there are moves to get investors to set up a plant that would turn the waste into energy production.

The Nsumia disposal site, which is one of the biggest landfill sites, is about 680,000 cubic metres and has been serving Accra and its surrounding areas.

The Majority Chief Whip during the commissioning of the Nano Foods said he had met with the German Ambassador, to discuss the building of ‘waste to the energy’ power plant to treat urban solid waste in Nsawam.

He said he was part of a delegation that was in Germany to push for the plant that would turn refuse into clean energy to help factories within the constituency to have sufficient energy for production.

“The experts from Germany told me they’ve started something in Kumasi and they are looking up to build 10 centres across Ghana. So I am trying to lobby for one of the plants here to help curtail the pollution coming from the landfill site,” he said.

He also said there is a brewery factory going through the process to be commissioned, which will be the third factory in the constituency since the 1D1F policy was initiated to deal with the unemployment situation.

He urged the teeming youth and the people of Nsawam Adoagyiri to exercise restraint as he is committed to getting the government to provide more jobs.