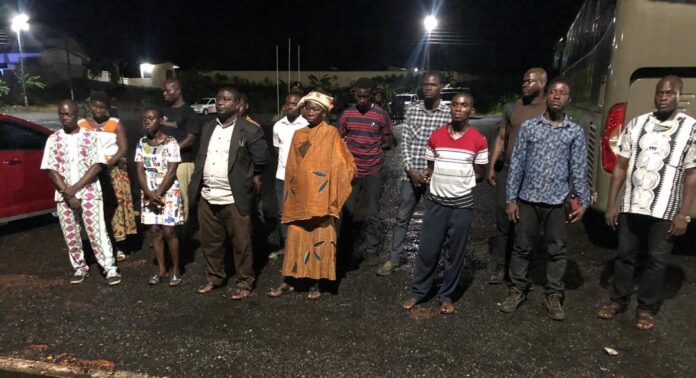 A nursing mother with 13 others suspected to be associated with the separatist group, Homeland Study Group Foundation (HSGF), have been arrested at Aziavi in Kpando in the Volta region.

In all, 14 suspects including 11 men and three women, one of whom is carrying a 2-year-old child, were arrested on Saturday, May 30, 2020 during a joint security operation carried out by the 66 Artillery Regiment of the Ghana Armed Forces, Bureau of National Investigations (BNI) and the National Security.

The suspects are reported to have been in a serious meeting, discussing strategies to move their unlawful secession agenda forward when they were arrested.

All 14, between ages 24 and 60 have since been handed over to the Volta Regional Police Command in Ho.

The Second in Command of the 66 Artillery Regiment, Major Jalali Din Ibrahim who confirmed the incident to the media said the team carried the operation based on intelligence picked up by the BNI.

He explained that on Saturday morning they received information about some meeting of persons suspected to be linked to the HSGF separatist group to be held at Kpando-Aziavi.

The Military then teamed up with the BNI and National Security to undertake the operation.

Major Ibrahim then sent three patrols to go and verify the information.

Fortunately, they found the people holding the meeting. They rounded them up and managed to arrest 14 while others managed to escape.

Some documents retrieved from the meeting which Major Jelali Deen Ibrahim described as “evidence and documents of intelligence of military value,” are very significant as they show the intentions and plans of the separatist group.

Some of these plans include strategies and activities intended for the Volta and Oti regions, the military added.

He assured residents to be peace as the security forces including the Police are on high alert to avert any disruptions intended by the secessionists in any part of the country, especially the Volta and Oti region which happens to be the base of the group.

The unlawful idea to secessede has been spearheaded by a number of groups in the Volta Region for years, however in recent times the activities of the Homeland Study Group Foundation led by Octogenarian, Charles Kormi Kudzordzi aka Papavi Hogbedetor has been profound.

The group like other separatists are campaigning to have parts of the Volta, Oti, Northern, North East and Upper East Regions of Ghana carved out to create a country they call Western Togoland.

Some of the groups recent activities are declaring a false Independence for their ‘Western Togoland’ territory in Ho on November 16, 2019 and hoisting of their flag on the eve of this year’s independence at the Volta Regional Coordinating Council.

Interestingly the leader of the group has gone into hiding since November 2019, yet security agencies continue to arrest his followers, some of whom have been involved in some kind of military training in Afadjato South District and Ketu North Municipal area.