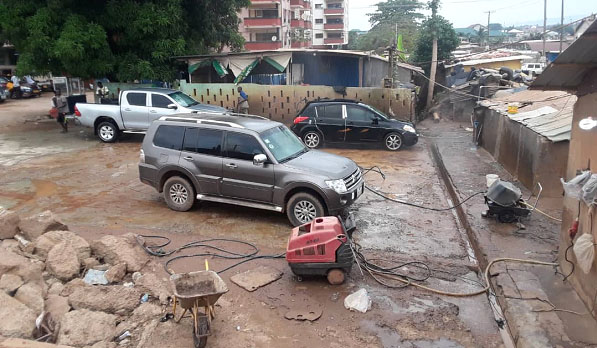 Part of the land

OCCUPANTS OF a parcel of land adjacent to REDCO Flats at Madina, near Accra, are urging government to intervene in what may result in bloodshed between them and hirelings of one Alhaji Abass Saraki, who was claiming ownership of the land.

According to the occupants, who number over 3,000, they have been carrying out their businesses on the 30-acre land since 1993.

They claim they had title to the land with the aid of the defunct Bank for Housing and Construction after REDCO, a subsidiary of the bank, was closed down.

The occupants, who are mostly artisans, drinking spot operators, car dealers and washing bay operators, among others, told journalists that   on June 2, 2019, a team of well built men (macho) in two Nissan pickups with registration numbers GV 773-14 and GV 711-14 came and pasted eviction orders on their shops with threats that if they failed to obey, they would be evicted by force by June 16, 2019.

According to them, the men informed them that the land belonged to one Alhaji Abass Saraki.

The occupants have, however, vowed to resist any attempt by the said Alhaji Abass and his men to forcibly evict them from the land they have occupied for over 26 years with valid land titles.

One of the occupants, Mark Oliver Boakye, said in a telephone conversation that one Hakeem, who is said to be an agent of Alhaji Abass, had illegally occupied a portion of this land along the RIZ junction and attempts to get rid of them had proven futile because they claim to have ‘connections’ in government and the top hierarchy of the police administration.

They said not even appeals made to the Member of Parliament, Boniface Abubakar Sadique, and the Chief of La Nkwantanang, Nii Kortei Dzor ll, had yielded any good results.

They are, therefore, calling on the Interior Minister and the Inspector-General of Police to intervene to avoid any bloodshed.

A Leader Must Rise Up In Self-Defence!

Ahuofe Patri Fires Back At Critics