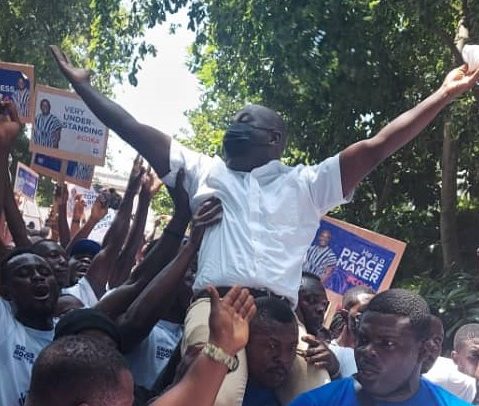 ODENEHO KWAKU Appiah’s hopes of becoming the next Ashanti Regional New Patriotic Party (NPP) Chairman, has been given a major boost.

This follows the massive display of love that the teeming NPP delegates showed to him yesterday during the NPP annual Delegates Conference.

Significantly, most of the NPP members who are vying for positions in the party at the regional and national levels were also there, but the reception for Odeneho was a standout.

Odeneho, who is the current NPP Chairman for Afigya Kwabre South Constituency, was followed by hordes of NPP members at the programme venue.

Most of his followers were seen wearing his campaign T-Shirts, embossed with an acronym ‘COKA’, which is translated as ‘Chairman Odeneho Kwaku Appiah’.

At a point, Odeneho was even carried shoulders high by some enthusiastic NPP members through the Forestry Commission Training School Park at Ejisu, venue of the programme.

His ‘One Man No Chop’ campaign slogan seems to be doing the trick for him as the party delegates embraced the slogan.

He later told journalists that the NPP cannot afford not to bring everyone on board to win the 2024 election.

He called for tolerance, respect and hard work to enable the party to break the eight.

The Ashanti Regional Minister, Simon Osei Mensah, called for total unity in the party so the NPP’s vision to win the 2024 elections would be feasible.

He said the party hierarchy should make sure resources get to the NPP grassroots, warning that neglecting the party’s grassroots would be suicidal.

Mr. Osei Mensah, recounting history, stated that the NPP won the 2000 and 2016 elections basically because there was total unity and oneness in the NPP at the time.

Bernard Antwi Boasiako, aka Wontumi, the Ashanti Regional NPP Chairman, also called for clean campaign, devoid of insults and insinuations so party unity would be sustained.