Ohemaa Mercy Weeps As Husband Surprises Her With New Jaguar 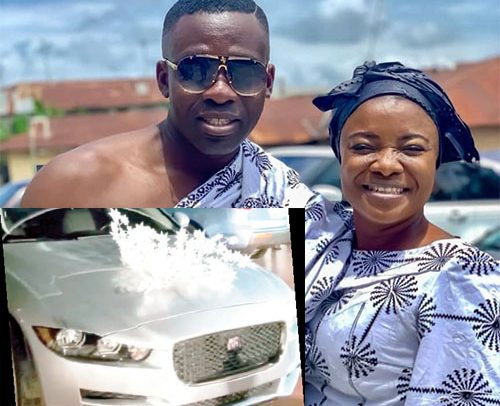 Celebrated gospel artiste Ohemaa Mercy was surprised with a brand new Jaguar by her husband, Mr. Isaac Twum-Ampofo, on Saturday as part of her birthday packages.

The ‘Aseda’ singer turned 42 on Saturday, and as part of efforts to appreciate her for being with her husband in both their difficult and good times, Mr. Twum organised a surprise birthday party for her in their house.

The party was strictly by invitation and attracted some of the ‘movers and shakers’ of Ghana’s showbiz industry.

Among them were Francis Amo, Becca, Cwesi Oteng, music producer Fred Kyei Mensah, radio presenter Andy Dosty and many others.

But that wasn’t the only surprise for Ohemaa Mercy during the night as Mr. Twum walked her to a stand in front of the Jaguar he bought for her.

It was a remarkable feeling for Ohemaa.  She shed tears of joy as the car was presented to her.

She, indeed, could not control herself. She hugged him and buried her face into his chest while party guests screamed to congratulate her.

The two had been together for many years before they married in October 2002. Next month would be exactly 17 years since they got married, and their relationship is still alive.

Indeed, their marriage looks beautiful from the outside.

But Ohemaa once said in an interview that like other marriages, they also have their own issues but they don’t allow that to destroy their relationship.

Kwaku Bediako, Others On BBC For Leading Men's Fashion