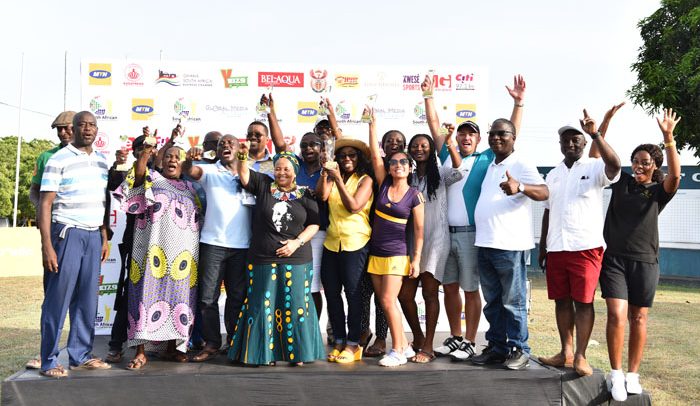 Lulama Xingwana, Ernest Boateng (2nd right) in a pose with winners and sponsors after the competition

The event, which was meant to celebrate South Africa and its Freedom Day, took place at the Sakumono Celebrity Golf Course six days ago.

Kwaku Okyere beat Emmanuel Quarcoo and Robert Abbey to second and third places respectively, with a handicap of 39 making 20 fronts and 19 back in the male Group A.

Leticia, who won both the longest drive and the closest to pin drive of 6.10 metres, beat Mary Prempeh and Nana Bema Tackie to second and third place respectively.

Ernest Boateng, Chief Executive Officer (CEO), Global Media Alliance, the organisers of the tournament, stated that it was aimed “at bringing together competing golfers both from the Ghana and South African communities to celebrate a memorable day on the calendar of South Africans and Africa in general.”

According to him, the event, among other things, was to offer an opportunity for all South African businesses, diplomatic corps, corporate Ghana and individuals to network and have fun through the game of golf.

“Freedom Day commemorates the beginning of democracy in South Africa. It is a remarkable day in the history of South Africa and Africa, for that matter, bringing to mind stalwarts like Nelson Mandela,” he stated.

Lulama Xingwana, South African High Commissioner to Ghana, who was the special guest of honour for tournament, said South Africa was happy about the tournament, which was aimed at celebrating their independence.

She said, it reminds South Africans of the historical day that South Africa voted for its freedom and independence.

“The day is embedded in our history and hearts forever and South African freedom is to celebrate all of Africa and its independence, which serves as a freedom for all Africans,” she highlighted.

The winners for both the male and female Group A categories received flight tickets to South Africa, as well as gifts from sponsors.

From The Sports Desk P