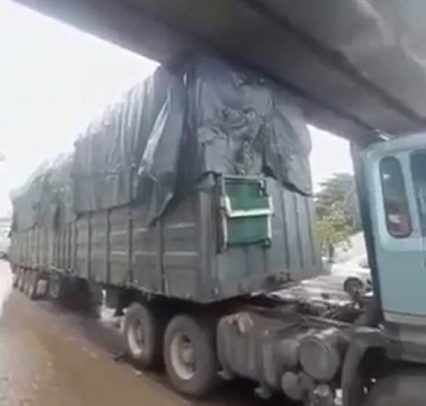 An overloaded Benin Republic registered articulated truck last week caused a scene around the Shangri La Hotel in Accra when its upward pointing cargo threatened to damage the railway overpass.

A man who described himself as the Board Chairman of the National Road Safety Authority (NRSA), who chanced upon the scene, was overheard rendering a narration to a journalist of GBC about what he saw and the action he took in a video which was spread through social media.

“I pulled over and asked the driver not to move. Interestingly the head of the MTTD COP Aboagye Nyarko is on my board of the NRSA of which I am chairman,” he said.

The MTTD boss sent some officers to the scene.

He said he was on his way to attend an important meeting on road safety when he chanced upon the scene and immediately stopped the vehicle and called the police.

It would appear that the vehicle had exceeded the cargo height limit for that particular overhead, yet the driver was trying to force his way through the point.

The board chairman pointed out that there was a big commotion at the place as the vehicle was on the middle lane. Other vehicles had to stop.

He wondered how we can develop the African continent with this kind of attitude.

The vehicle, a long articulated truck had travelled across Togo and from Aflao to the point where it was stopped by the NRSA Board Chairman.

YFM To Unearth Future Of Rap Through ‘Rapture’