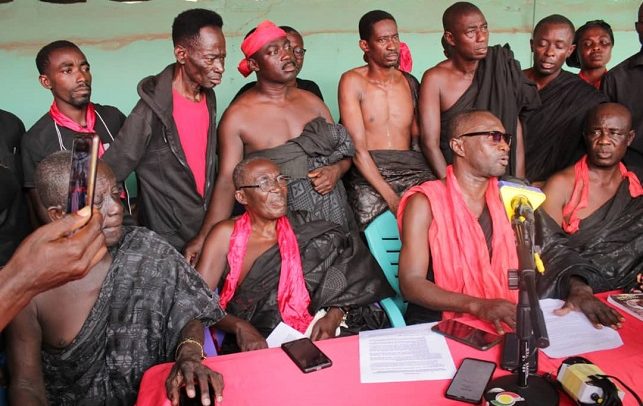 The leadership of Asona Akonkodease family of Offinso addressing the conference

The bid by Dr. Kofi Kodua Sarpong, immediate past Chief Executive of Ghana National Petroleum Corporation (GNPC) to be enstooled paramount chief of the Offinso Traditional Area in the Ashanti Region to succeed the late Nana Wiafe Akenten III has been met with a stiff opposition.

The leadership of the royal Asona Akonkodease family of Offinso has challenged the eligibility of the purported nomination of Dr. Kofi Kodua Sarpong for the vacant position of Omanhene of Offinso.

Addressing a news conference on Tuesday, May 11, 2022, Mr. Osei Mensah, spokesperson of the Asona royal family traced the ancestry of Dr. Sarpong to be an indigene of Sekyere Beposo, and wondered how he would claim to have some ancestral links with the royal Asona family of Offinso and to be the next Omanhene of Offinso.

Dr. Sarpong, who is the current chancellor of the University of Professional Studies (UPS), was said to have been nominated by Nana Ama Serwaa Nyarko, Offinsohemaa to succeed the late Nana Wiafe Akenten III alongside 18 other contestants known to have submitted requests to mount the Wiafe Stool.

But the Akonkodease family has totally rejected Dr. Sarpong’s nomination on the grounds that the process was flawed as Nana Kwadwo Asiam, the Akonkodease Abusuapanin was not involved in the selection process.

Unhappy with the development, Osei Mensah said the Abusuapanin after consultation with principal members of the family swore the great oath on the Offinsohemaa to the effect that Dr. Sarpong was not a bona fide royal of the Wiafe Stool, and consequently she was wrong in nominating him for the stool.

According to him, “the Offinsohemaa’s response to the Abusuapanin was in the form of a contemptuous question -“and so what?”- after which she entered her sitting room and locked the door,” he said.

By that act, the family is convinced it has a strong evidence to prove that the Offinsohemaa has accepted or admitted the swearing of the oath on her but has ignored it and gone ahead with the process.

Consequently, Nana Serwaa Nyarko was said to have violated the great oath and therefore the nomination of and presentation of Dr. Sarpong to the kingmakers is null and void.