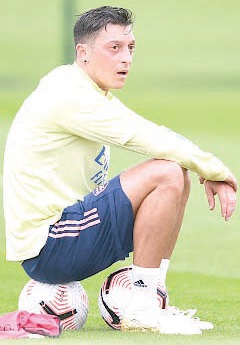 Mesut Ozil’s time at Arsenal appears to finally be over after the midfielder reportedly agreed to join Turkish side, Fenerbahce.

Ozil, who joined the Gunners from Real Madrid in 2013, has been out of Mikel Arteta’s plans since he took charge.

The door has been open for his exit since last year and Ozil has now agreed to make the move to Turkey where he has strong links.

Reports in Turkey suggest it is a “dream move” for the 32-year-old who is expected to join the 19-time Turkish league winners this month.

He has agreed to a three-and-a-half-year contract, which brings to an end his £350,000 per week deal at Arsenal.

Ozil, who had been in talks with US side, DC United, posted a throwback picture on Twitter of himself in Istanbul, with the caption, “This city”, on Tuesday night.

He has been firmly out of favour at the Emirates under Arteta and hasn’t played a single game all season after being left out of both official squads for the Premier League and Europa League.

Arteta hinted recently that Arsenal’s big earners would have to leave the club in January, adding, “We cannot sustain the numbers we have.”