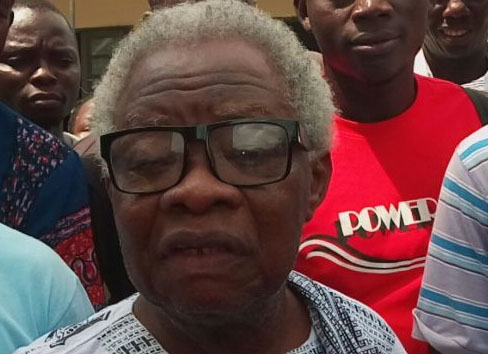 Charles Komi Kordzordzi, aka Papavi, and his Western Togoland project may sound surreal and fantastical but in security matters nothing should be taken for granted.

We were just wondering how the octogenarian managed to organize a crowd to declare independence for a part of sovereign Ghana, close to a law enforcement installation, a police training school without being noticed by those                  who are remunerated to protect the territorial integrity of this country until the Volta Regional Police Command came up with an explanation.

Of course, such face-saving gestures work only to some extent. Under the circumstances under review, we beg to differ and to state without mincing words that somebody slept on their jobs.

Whoever is responsible for intelligence gathering in a part of the country known to harbour elements such as Papavi who was recently airlifted to Accra over secessionist activities  should have not have downgraded  the surveillance on the Home Study Group Foundation (HSGF) activists to the extent that he finally declared a so-called independence for a part of sovereign Ghana.

He delivered a speech and eventually said there now exists a country carved from the Volta Region and other parts of the country and then sat in a waiting car and vanished. Of course, he vanished because the security agents had not been able to trace him at the time of filing this report.

We appreciate the constraints security agents in the Volta Region may be facing in this regard but hasten to add that they could have done better. When there are persons or even groups with such secessionist agenda, constant monitoring is essential.

The National Security Minister has issued a statement about an intelligence-led operation to nab suspected terrorists. Although he was not specific about whether or not the operation had to do with the search for Papavi or not the man continues to be at large.

We understand that operatives of the spy community hardly talk about their strategies. We are confident that we can sleep and expect no so-called Western Togoland project would disrupt activities of Mother Ghana.

If Papavi is still in Ghanaian jurisdiction in a place he thinks is part of his imaginary Western Togoland we ask people with information about it to share same with the security agents.

Although he may have many willing indigenes of this part of the country sharing his wild dreams and ready to hide him, such persons should understand the import of what they are doing and come off it.

Ghana remains one indivisible nation with security agents and others ready to defend her territorial integrity.

Why Unbelievers Doubt The Existence Of Jesus