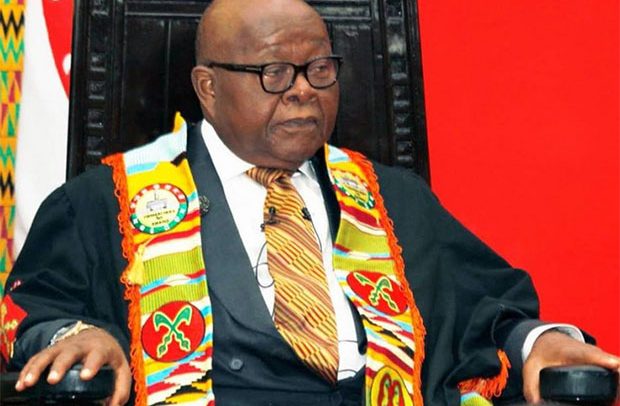 THE SPEAKER of Parliament, Professor Aaron Mike Oquaye, has said Ghana will come to a standstill if Parliament is closed down since the legislative assembly “is in a peculiar situation”.

He has consequently urged people calling for the shutting down of Parliament to relax since that is not within contemplation for now in the face of the threat of Covid-19.

Addressing Members of Parliament (MPs) in the Chamber yesterday, the Speaker said, “We all know one thing. Parliament is not like many other places that you can easily and simply say you have suspended or closed down.”

“Very soon, the Hon. Minister of Finance is going to read the substantive budget. If Parliament doesn’t sit, the country will shut down. There will be no money. As simple as that,” he said emphatically.

“So as for Parliament, please let us know we are in a very, very peculiar situation. In fact, government departments can operate in case of emergency separately and individually,” he added.

“Parliament is Parliament. So let us also be very careful about how to manage protocols and matters concerning us. In fact, it looks like we will be the last stop; that is Parliament. Otherwise, we don’t have a country. So we are in a very, very critical situation and will accept it as such and operate as such,” he added.

According to him, the continuous sitting of Parliament in the midst of the Covid-19 pandemic is a call to duty, while calling on MPs to cooperate and “make sure that anyone who does not have any priority business in Parliament is sent away and reported to the marshal office and the security will deal with that person.”

“We are going to be very rigid because we have a duty to perform,” he pointed out, adding “anyone who feels symptomatic in the least manner should please contact the medical department which will arrange the test immediately. That is the position.”

The Speaker disclosed that at the dawn of last Monday, the Chamber was fumigated fully, saying “this will be done again at dawn on Monday, 13th July, for the House to sit for our safety and security.”

“I have been advised that a few people have broken the instructions by way of auxiliary staff who insist on coming. One person actually said his MP told him to come. Honourable Members, this is the last warning,” he said.

“If any person engaged on a temporary basis by way of research assistant and all those people who have been asked to stay at home and work electronically is seen within the parameters of Parliament that person will be disciplined.

“When that happens nobody should come and plead for anyone. It will be breaking the rule. And let me also remind you that any MP who sees any stranger on your floor and you accommodate and tolerate that person, you are helping the spread of the virus,” he said.

“Let’s keep human traffic to the minimum and do all we can as much as possible,” he added.