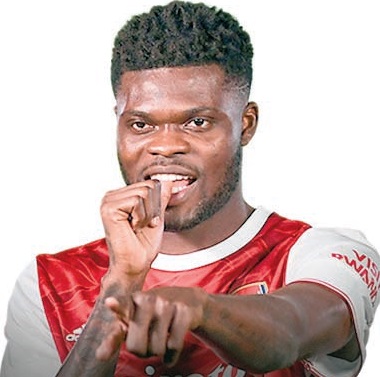 Vieira captained the Invincibles to Premier League glory in 2004 and Partey has been tipped to do a similar job the former France midfielder did in the middle of the park.

After Arsenal paid his £45 million release clause, the Black Stars midfielder moved to North London on a four-year deal with the option of an additional season on the European transfer deadline day.

Traore, who played for Arsenal between 2006 and 2011, is delighted by the signing of the 27-year-old and the qualities he will bring to Mikel Arteta’s team.

“I am extremely pleased and I think all Arsenal fans are absolutely buzzing,” Traore told Talk Sport.

“They know about Patrick Vieira, because he is a legend of the club, and there is definitely some similarities with Thomas Partey.

“For me, they needed someone like that in there and a grafter and someone happy to do the dirty work. He knows that is his job and his role,” he said.

The Senegalese left-back also reserved praise for Arteta’s impact at the club after securing Pierre-Emerick Aubameyang’s contract renewal a month ago and he wants outcast Mesut Ozil back in the team.