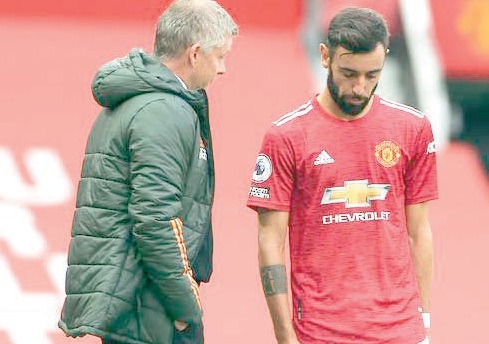 Manchester United’s Fernandes has rejected claims that he criticized coach Ole Gunnar Solskjaer’s tactics after being substituted in his team’s heavy defeat to Tottenham.

Fernandes, who also denied reports he had harsh words with his teammates following the 6-1 loss on October 4, said it was just an attempt by the media to destabilize the team.

“I think there has been a lot of speculation lately about this,” Fernandes, who started in Portugal’s 3-0 win over Sweden, told SportTV.

“First, they (the media) said there was a discussion with the teammates, and as that didn’t sell, it was then with a teammate (Victor Lindelof), and as that didn’t work either, it was with Solskjaer. I believe it’s just a way of destabilizing the group a little bit,” he said.

Fernandes, who had given United an early lead from the penalty spot against Spurs, said he was not happy to be replaced at half-time with his team trailing 4-1 and a man down, but “accepted” Solskjaer’s decision.

“When the coach told me that the game was over and that we would have many more games ahead, I understood that, of course. I was not satisfied with leaving, but I didn’t speak or say anything at that moment that could harm the group.

“Even after the game, the coach sent me a message to wish me good luck with the national team. (In the changing room at the end of the game) He asked me and two or three other players if we thought we needed to offer some words of support to the group but nobody wanted to speak because it wasn’t the best moment,” he said.

Fernandes has backed Solskjaer, who is under pressure heading into tomorrow’s league game at Newcastle United.