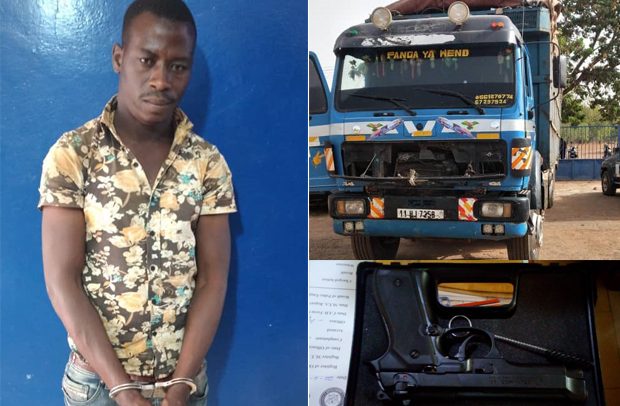 Suspect, the vehicle and the pistol

THE UPPER EAST REGIONAL POLICE COMMAND is on the heels of a man who attempted to bribe the police to release a Burkinabe suspect, Surogu Mumuni, who was arrested for allegedly trying to smuggle a pistol into Ghana.

According to the Upper East Regional PRO, ASP David Okyere-Fianko, the 29-year-old Burkinabe suspect, upon his arrest on Wednesday, March 24, at the Doba-Kandiga checkpoint, called the wanted man on a phone to come to his aid.

Speaking in an interview in Bolgatanga on the subject, ASP Okyere-Fianko said the dreadlocked man arrived at the checkpoint about 10 minutes after the Burkinabe suspect had made the call to him.

The man, whose name the police did not mention, started pleading with the police officers for an amicable settlement. The police feigned interest as the un-named man proceeded to a nearby mobile money vendor, to withdraw an amount of GH¢5,000.00.

After withdrawing the money, he asked the vendor to bring it to the police, possibly, for him to be able to escape arrest should the police decide to change their mind about the bribe.

According to ASP Okyere-Fianko, police officers there combed the area but could not find him, and so they brought the Burkinabe suspect and the GH¢5,000.00 bribe exhibit to the Regional Police Headquarters in Bolgatanga for appropriate action to be taken.

According to ASP Okyere-Fianko, the police were still investigating and trying to arrest the wanted man, as well as identify any persons involved in the incident, especially the owner of the weapon, who is thought to be hiding at Ashiaman in the Greater Accra Region.

“We are doing everything possible to recapture this gentleman and whoever gave the weapon to the suspect, and the proposed recipient at Ashaiman. We are doing this to be able to round up all the middlemen or the teams within which these illicit arms are being traded,” ASP Okyere-Fianko said.

An earlier statement issued by ASP Okyere-Fianko on the arrest commended the police officers at the Doba-Kandiga checkpoint of the Bolgatanga-Navrongo trunk road, for their vigilance.

According to the statement, the police at the checkpoint had stopped and searched an articulated Mercedes Benz truck coming from Burkina-Faso, during which the suspect took to his heels, only to be arrested after a hot chase.