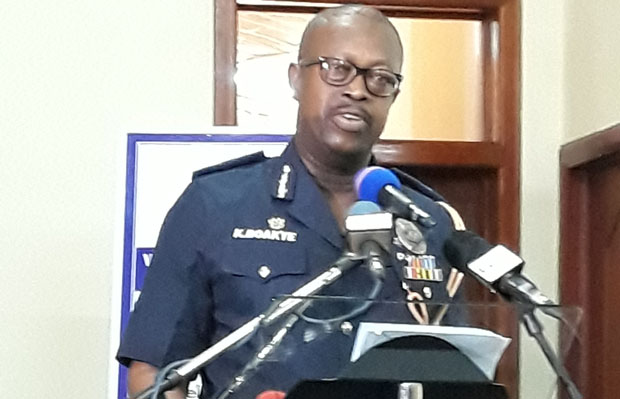 The Ghana Police have intensified efforts to weed out miscreants from the Service.

The move is to restore its image and reputation in the service which is fast deteriorating.

Commissioner of Police (COP), Nathan Kofi Boakye, Director General in charge of Legal and Prosecution who was special guest of honour on behalf of the Inspector General of Police (IGP) George Akuffo Dampare, at the passing out parade of 612 Police recruits at the Police Training Depot at Pataase in Kumasi in the Ashanti Region cautioned new officers who were recently recruited into the Service to let their character, attitude and behaviour reflect the principles of the Police administration.

COP Nathan Kofi Boakye who reviewed the parade commended the recruits and their instructors for hard work and commitment.
COP Boakye said the training has adequately prepared them to meet the challenges of modern policing and cautioned that those who fail to meet standards will be dismissed.

In all, 312 of the recruits, comprising males and 300 females passed out.

The newly recruited police officers underwent six months of comprehensive training in all aspects of police training, capable of making them competitive to face the challenges of modern policing.
The recruits constituted the first batch of trainees in 2022.

The officers were joining the service at a crucial moment when the administration is coming out with reforms to address the numerous challenges facing them, including emerging crimes such as terrorism in the sub-region and changes in their modus operandi.