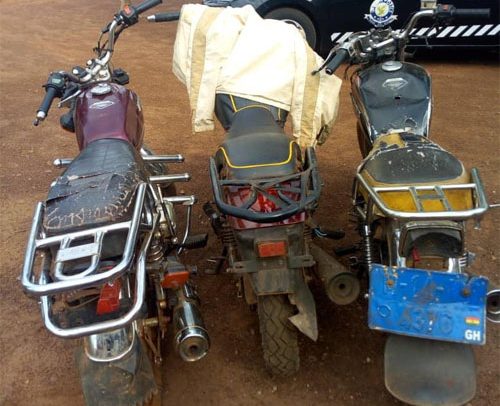 Information reaching DGN Online indicates that in the early hours of Thursday, June 27, 2019, police and some suspected armed robbers exchanged gunfire on the Savelugu-Walewale highway.

The shootings occurred after the robbers blocked the highway and attempted robbing passengers traveling on that stretch.

When Police got to the scene, the robbers, numbering about six, had lined up vehicles and started robbing the travellers.

DGN Online gathered that the robbers opened fire on the police prompting the latter to return fire and chasing the robbers who fled into the bushes.

The robbers accordingly abandoned three motorbikes at the scene which are now in police custody.

Police suspect some of the robbers might have escaped with gunshot wounds. They have therefore called on individuals, hospitals, herbalists and other health facilities to report suspicious injuries for necessary action.

The Northern Regional Police Public Relations Officer, DSP Yusif Mohammed Tanko, who confirmed the incident to DGN Online entreated communities around Savelugu to be on the lookout for strange and suspicious persons in their communities and report same to police.

DSP Tanko also entreated the public to assist the police to trace the owners of the seized motorbikes.