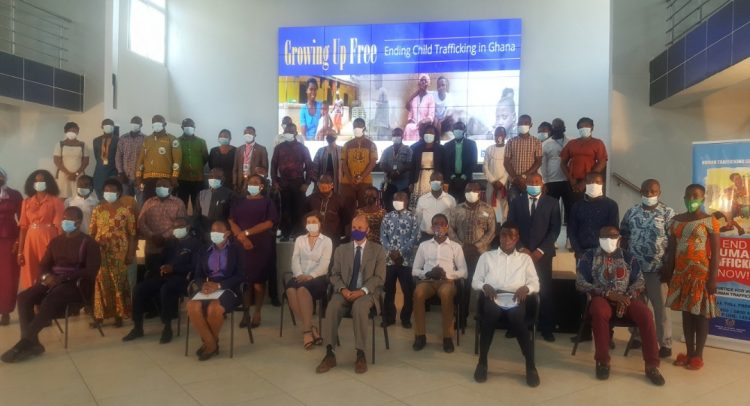 From left Joha Braimah, Dr. Afisah Zakaria and christoph Lamora in a group photo with others at the second national symposium on human trafficking in Accra

It has emerged that some opinion leaders and politicians living within areas where child trafficking cases are on the ascendancy in the country are interfering in the fight to stem the tide.

The interferences of these persons, according to stakeholders, are thwarting their efforts in this fight thus putting their lives in danger as perpetrators are freed.

Michael Gerang, a community member under the Community Child Protection Committee , at Jirakope in the Krachie West District , Oti Region who shared his experience said this action by the said opinion leaders makes it difficult for them to work in their communities since perpetrators when arrested , end up being free hence escaping justice.

Speaking at the second national symposium on human trafficking held in Accra, Gerang said some of the communities where children are trafficked and used for fishing see this menace as normal.

“I have seen children being used in fishing in my area but did not know it is a crime until I was trained together with others by the Free The Slaves , International Needs And Partners In Community Development Programme (PACODEM) .”

Speaking with ardor, he said , “it is a pity to see young children sent into the cold weather and exposed to hazardous works without pay and denied education, health care and even food.”

The Head Of The Anti Human Trafficking Unit , Superintendent Mike Baah also corroborated the issue of Michael Gerang adding that this affects their work in terms of prosecution even though the police have successfully had some convictions recently.

He said the police were working closely with partners and other stakeholders to ensure that child trafficking are eradicated from Ghana.

“Currently we are setting up officesin other regions to augment the work force of the unit.”

Dr Afisah Zakariah , Chief Director For The Ministry Of Gender , Children And Social Protection in a statement said the last five year under the Child Protection Compact Agreement (CPC) helped Ghana to have a common approach and goal on various issues confronting the country which facilitated dialogues, created platforms for actions , negotiating voices and tools to use for mobilizing resources in the fight against child trafficking in Ghana.

“The compact was signed on June 23, 2015 and the goal was to have a holistic approach to reduce child trafficking, prosecute and convict child traffickers and improve the quality of protection services for child victims.

Christopher Lamora, Deputy Chief of Mission who represented Stephanie S. Sullivan, the US Ambassador to Ghana in an address said the United States stands in defense for human rights and is tirelessly working with Ghana in the hope that one day child trafficking practice will end in the country

He said US upgraded Ghana from tier two watch list to tier 2 and Ghana has retained this for two years but they hope that one day, Ghana will hit tier one.

Adding he revealed that none can achieve this work alone since success can be achieve when all stakeholders work together
He urged stakeholders to address the challenges and gabs that have been identified for a successful prosecution and response.

Delivering his welcome address, Joha Braimah West Africa Regional Director For Free The Slaves, an international nongovernmental organization which is a leader in the fight against human trafficking in the country said purpose of the national symposium on human trafficking is to create an avenue for dialogue among stakeholders including community members in Ghana to dialogue on the nature and scope of child trafficking and to reflect on the advances and challenges ahead.

He said the first symposium was held in 2016 and second symposium is a follow-up for members to take stock of the remarkable progress on some of the challenges identified and accompanying recommendations made towards addressing child trafficking moving forward.

Other stakeholders who attended the symposium were representatives from the Ghana Immigration Service, The Department of Social Welfare, and Child Labour Unit As well As Some Non Governmental Organizations.