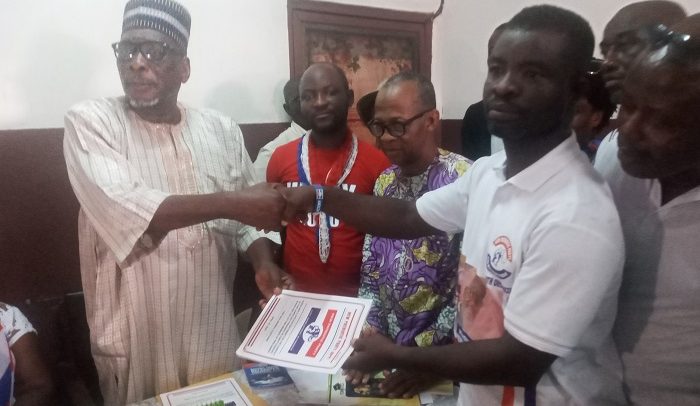 POLLING AGENTS, leaders and members of the Ayawaso Central Constituency of the ruling New Patriotic Party (NPP) on Friday, picked nomination forms for the sitting Member of Parliament (MP)for the constituency, Henry Quartey, to contest in the party’s primaries slated for April this year.

In the early hours of Friday morning, hundreds of party sympathizers thronged the streets of Newtown in Accra, where they began a procession to the party’s head office in the constituency situated at Alajo.

Led by their party executives, the crowd sang and danced to music blaring from loud speakers and countless brass bands and ‘dzama’ groupings, while they chanted, “Four more for Nana; four more for Henry Quartey!”

At the party’s constituency head office, the NPP Ayawaso Central Youth Organizer, Stephen Mensah submitted a cheque for GH¢2000 to the election committee headed by Alhaji Haruna Salifu and picked the nomination forms on behalf of the MP.

The form was then submitted to the elders of the party in the constituency represented by Sheikh I.C. Quaye, former MP for the area and Alhaji Mohammed Quaye, Municipal Chief Executive (MCE) for the Ayawaso Central Assembly.

After about 15 minutes, they filled the forms and resumed another procession to the party’s head office where Sheikh I.C Quaye submitted the form and cheque of GH¢20,000 to the election committee on behalf of the MP.

Following the exercise, Abdul Rashid Kawawa Sambo, a polling station agent disclosed that the good people of the Ayawaso Central Constituency, seeing the good works done by the MP, had thought it wise to “keep him on the seat” by contributing monies and other resources to sponsor the nomination forms for the MP.

Describing the gesture as “unprecedented”, Mr. Sambo said heads of religious bodies, traditional leaders, market women and persons of different social and economic standing also contributed to the course, adding that the people are happy with the performance of the MP hence the move to support him.

He assured that, the MP would continue to work hard to bring development to his people while advancing and supporting the course and vision of President Akufo-Addo.

On his part, Sheikh I.C. Quaye touted the achievements of the MP and also assured that he would do more.

He called on the rank and file of the party to come together to support the good works of Quartey and support his quest to retain his seat for the next four years and beyond.