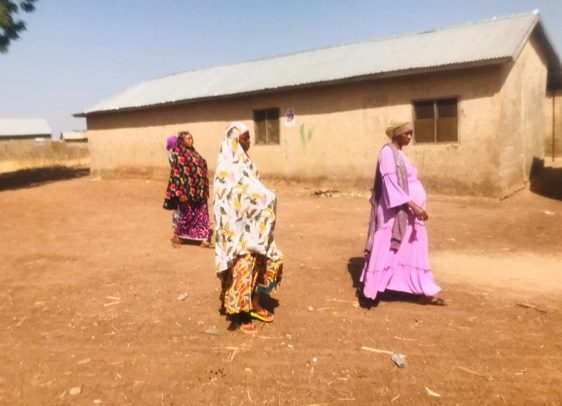 Pregnant women walking from Kpatuli community to Savelugu for antenatal

Pregnant women in the Kpatuli Electoral Area in the Savelugu Municipality of the Northern region have been compelled to walk from the community to the Savelugu municipal hospital to seek medical care.

The Kpatuli Electoral Area which has three communities with over 4,000 people does not have a health facility.

A pregnant woman, Asana Issahaku told DGN Online that they walk a long distance from the Kpatuli community to the Savelugu hospital for antenatal and other medical care services.

According to her, sometimes by the time they arrive at the hospital due to the long distance from their community the health workers send them back home because they would have exhausted the number of patients they attend to.

“Our community to the Savelugu hospital is very far and as a pregnant woman, I will have to walk to the place in this condition. We are appealing to the government and anybody who can help to come to our aid and build a health facility in our community here for us so that we can go for antenatal services in this community.”

She indicated that some pregnant women in the community visit traditional birth attendants whenever they have any medical condition during their pregnancy and also give birth at home due to the lack of health facilities in the community.

“ Sometimes you can walk to the hospital and on your way, you get tired and cannot continue the journey and these are the reasons some women prefer to rather go to traditional birth attendants in the community for their services even though medically we know it’s not safe but we do not have a choice so we are begging that we badly need a health facility in our community.”

When DGN Online contacted the Assembly Member of the Kpatuli Electoral Area, Yakubu Issah, he said the lack of a health facility in the area has been a concern among the residents for so many years adding that he has reported the issue to the Savelugu Municipal Assembly on countless occasions but to no avail.

“ I have discussed this issue with the MCE and stakeholders at the assembly level severally but the only response I get is that the assembly is broke and we are told that our municipality takes the lowest common fund from central government.”

He, however, lamented about the rate at which pregnant women resort to traditional birth attendants in the community.

“ The most worrying aspect is that the women go to the traditional birth attendants and after they give birth at home the newly born babies start to experience complications simply because they don’t go to the hospital for checkups regularly.”

He called on the government, NGOs, philanthropists, and individuals to come to their aid and build a health facility to enhance health care in the electoral area.

Meanwhile, the chief of Kpatuli, Seidu Mahama has allocated some acres of land should any organization or individual wish to construct a health facility for the area.

The Sustainable Development Goal three (SDG-3), of which Ghana is a signatory, is about ensuring healthy lives and the promotion of the well-being of all at all ages.

The SDG-3 estimates that by 2030, the global maternal mortality ratio should reduce to less than 70 per 100,000 live births, end preventable deaths of newborns and children under five years of age, with all countries aiming to reduce neonatal mortality to at least as low as 12 per 1,000 live births and under-five mortality to as low as 25 per 1,000 live births and achieve universal health coverage, including financial risk protection, access to quality essential healthcare services, and access to safe, effective, quality, and affordable essential medicines and vaccines for all.

MzGee Sent My Audio To Her Husband- TT Alleges