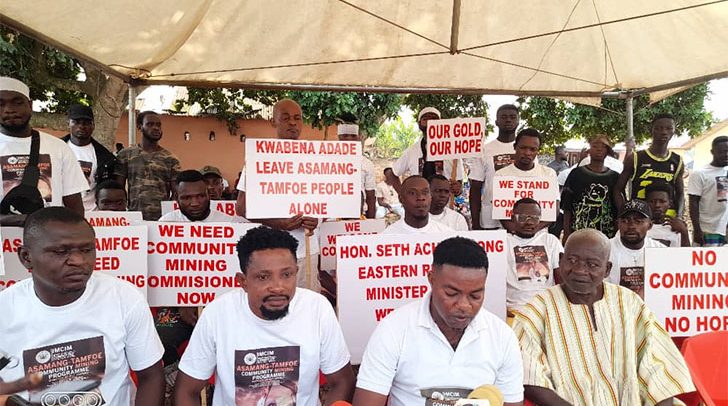 The Residents of Asamang Tamfoe in the Atewa East District of the Eastern Region mostly the youth are divided as some have vowed to resist any form of mining in their community while others are also calling on the government to commission the project for the youth to get employment.

Some of the residents earlier on Monday, December 13, 2021, embarked on a demonstration to indicate their determination to resist all attempts to implement any form of mining in the area.

The Assemblyman for the area, George Asare, who joined the demonstration, also indicated that the community would resist any form of mining to protect their farmlands.

He maintained that the community “will use the land for farming. Our problem is we don’t have enough land. The little that we have now we are farming cocoa and plantain. So we don’t want any type of mining; whether proper mining or community mining.”

However, another group on Monday, 11th January 2022 led by Kwadwo Danso, an Organiser also addressed a presser, calling on the government to commission the community mining project in the area to enable the youth to have the full benefits of the policy since it’s their legitimate right.

According to him, they will form a committee that will be responsible to place proper plans to execute the projects such as reclamation of the lands, preservation of the water bodies, and protecting the farmlands among others.

He said the committee will make sure, they use the money that they will get from the miners to construct boreholes, toilet facilities, community center, chiefs palace, schools among others for the commuters.

The Chief of Asamang- Tamfoe, Osaberima Kwame Kuoh II, reacting to the two groups’ concerns also indicated that he welcomes the government decision of community mining since it will yield results and also create jobs for the teeming youth who have been restored to smoking in the area.

Osaberima Kuoh explained that the other groups are against the government decision since most of them are selling their farmlands to the illegal miners behind the scenes, and don’t want to be known hence fighting against the community mining which will benefit the entire residents.

He, therefore, appeals to the government through the Ministry of Land, and Natural Resources to come to the community and commission the project immediately, and also tasked the committee to put proper measures in place that will be gainful to the community.

‘Double Your Efforts To Increase Productivity’