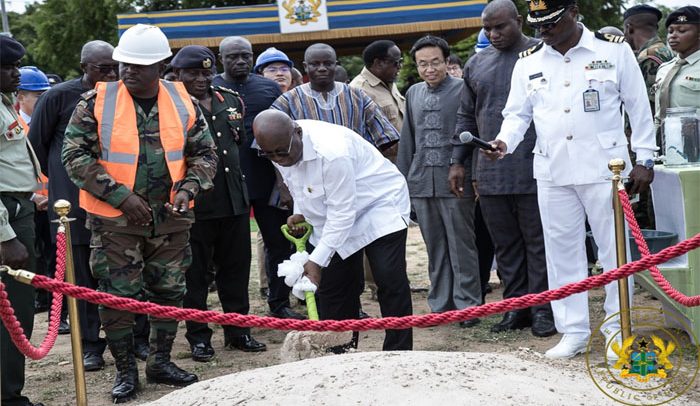 President Akufo-Addo cutting the sod for the construction of a housing project at the Military Academy Training in Accra.

The President, Nana Addo Dankwa Akufo-Addo, yesterday broke the ground for the commencement of a $100 million project aimed at providing offices and residential accommodation for members of the Ghana Armed Forces (GAF).

The project, which would be undertaken by Poly Chanda Overseas Engineering Company Limited and Poly Technologies Incorporated Chinese firm, is expected to deliver housing units in specified military installations nationwide. It forms part of an overarching development agenda to retool, re-equip, rehabilitate, upgrade and provide new accommodation and training in response to the ever-changing threats to national security.

Additional works include the provision of external works at all construction sites and deployment of project construction materials.

Speaking at a ground-breaking ceremony at the Military Academy and Training School (MATS) at Teshie in Accra yesterday, President Akufo-Addo indicated that when completed, the project would help reduce the accommodation challenges confronting the GAF.

He also expressed hope that the establishment of a national housing and mortgage fund would equally leverage private capital investment in the housing industry to help address effectively the country’s two million housing deficit.