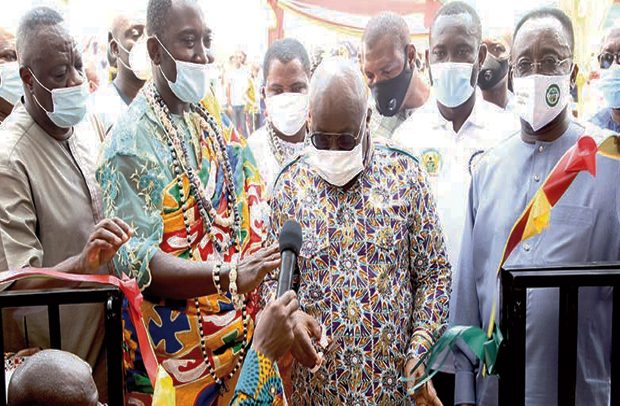 Also commissioned by the President was a National Entrepreneurship Innovation (NEIP) Centre also at Dawhenya.

The dual projects are intended to make agriculture appealing to the youth and university graduates.

The Greenhouse Estate project is located at the Dawhenya Irrigation Site.

Seventy five greenhouse domes have already been constructed at Dawhenya under the auspices of NEIP and the Ministry of Agriculture.

A thousand more greenhouses domes have been planned in a 10-region-wide project which it is envisaged would provide 10,000 direct jobs annually, the annual revenue from which has been put at GH¢150,080,000 every year.

Speaking about the features of the project, President Akufo-Addo said the 75 greenhouse domes at Dawhenya could produce 4,500 tonnes of tomatoes annually, bringing a yearly revenue of GH¢11 million, and employing a total of 230 people.

Experts will come to the country from Israel to impart knowledge about the management of the project in fruit and vegetable production.

The experts will also be teaching farmers the production of fruits and vegetables, including their marketing.

President Akufo-Addo was excited about the relevance of the project for the country’s economy.

With the country’s population largely engaged in agriculture, he lamented the use by farmers of old-fashioned methods which can only produce low yields.

This, he added, makes the occupation unattractive as a “viable means of livelihood.”

“We are told by the data that some 250,000 young men and women graduates from our tertiary educational institutions annually, with only 2% being absorbed into the formal sector, while the remaining 98%, seek employment in the informal sector or remained unemployed,” the President said.

A partial response to this, he went on, had been the establishment of the Nation’s Builders Corp (NABCO) which has provided jobs for 100,000 unemployed graduates.

“We are on course to remedy the situation more permanently in creating greater opportunities for the youth by building a strong and resilient economy with the focus on diversifying Ghanaian agriculture, adopting value-addition activities and promoting industrialization with digital services which are the driving force for innovation, higher productivity levels and job creation,” he pointed out.

The project, he said, would make irrelevant weather conditions to determine the output of a farming season. “At this facility the reliance on favourable weather conditions in a particular season for vegetable farming will now be a thing of the past,” he added.

NEIP, an agency under the Ministry of Business Development, is responsible for the project.

Crops such as tomatoes, green beans and sweet pepper are grown under controlled micro environment, a scientific method which protects the plants from adverse climatic conditions such as cold, wind, precipitation, excessive radiation, extreme temperature, as well as insects and disease.