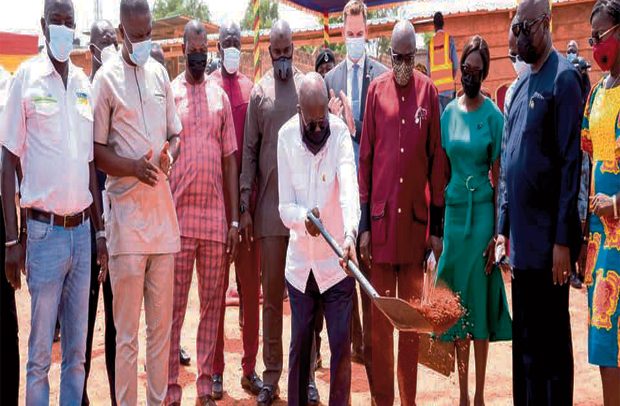 President Akufo-Addo cutting the sod for the project

President Akufo-Addo yesterday cut the sod for the construction of a GH¢5 million Ghana Award House, a new administrative building for the Head of State Award Scheme.

Speaking at the sod-cutting ceremony, the President explained that since its inception in 1967, the Head of State Award Scheme has challenged and touched the lives of many young Ghanaians, with some 750,000 young people participating and benefitting from the Scheme.

“I have always been excited about the work being done by the Award Scheme, and that is why I continue to urge them to ensure that as many young Ghanaians as possible benefit from it. To achieve this ambitious target, a befitting administrative office for the Scheme will be required. The provision of a Ghana Award House, to serve this purpose, is my commitment towards driving the agenda of the Award Scheme,” the President said.

The Ghana Award House project is a two-storey office block, with a two hundred (200) capacity conference room, and training facility designed to house the National Secretariat of the Head of State Award Scheme.

It is expected to help drive growth, impact, and the effective and efficient delivery of the Award Scheme to all young people in Ghana and beyond.

The President noted that the “completion of the Ghana Award House project will put Ghana ahead of many of the countries running the Duke of Edinburgh’s International Award”, and will mean that Ghana “will be the second country in Africa, after the Presidents’ Award of Kenya, and one of the few countries globally, to have its own administrative office.”

He also announced that, in support of the operation of the Award Secretariat, its operational cost would be borne by the Office of the President, under the direct supervision of the Chief of Staff.

“Vehicles are also to be allocated to the Secretariat for its use. In addition to the one-million-cedi contribution to this project, Government pledges to do what it can to ensure that the project is completed in the next thirty-six (36) weeks,” he added.

President Akufo-Addo called on individuals, corporate bodies, especially in the construction industry, to join hands and bring this project to fruition, explaining that they can donate bags of cement, blocks and other building materials in support of the project.

“Together, we can help make this project a reality. I thank all who have contributed consistently towards the success of the Award Scheme. Now is not the time to rest on our oars, but to help realise the vision of an Award Scheme that is truly self-sustaining,” the President added.