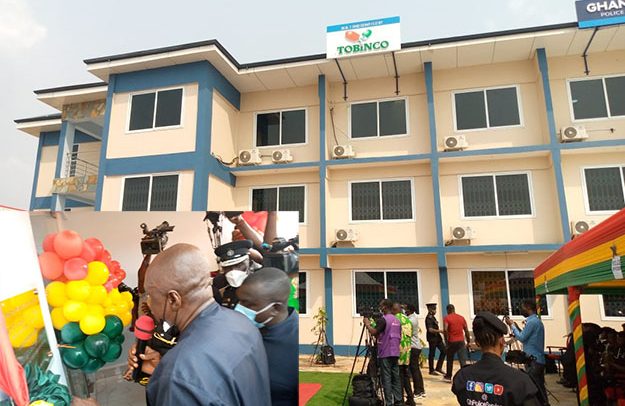 President Akufo-Addo has charged the Ghana Police Service to remain professional in the discharge of their duties as he gave the assurance that his government will continue to resource them to effectively discharge their enforcement mandate.

He said this in a speech read on his behalf by the Minister for the Interior, Ambrose Dery during the inauguration of the Police Professional Standards Bureau (PPSB) Headquarters at Nima in Accra.

The two-storey office complex started in 2015 by the then IGP, Mohammed Ahmed Alhassan, and was sponsored by Elder Nana Amo Tobbin I, Executive Chairman of the Tobinco Group.

He said for the police to become a world-class institution, its personnel must deliver their services in a professional and ethical manner.

“In view of the critical role played by PPSB towards the achievement of the vision of the Ghana Police Service to become a world-class police institution, it is unfortunate that the unit has over the years operated on a limited scope towards achieving their mandate.”

The President said the current Police Administration under the leadership of the IGP, Dr. George Akuffo Dampare, has redefined and initiated strategies to make the PPSB more proactive in ensuring professional standards within the service, prevent instances of unprofessionalism as far as possible and reduce instances of personnel misconduct which can trigger a reactive response.

He mentioned steps taken by the current administration to improve policing, including the   decentralisation   programmes which have led to the establishment of Regional PPSBs across all 18 police regions to bring the bureau to the doorstep of all; the  setting up of a Complaint Reporting Hotline for members of the public who feel aggrieved during any engagement with the police to call and seek redress in real time; the establishment of a Police Body-worn Camera Monitoring Centre to provide a 24-hour monitoring of personnel who will be required to wear the cameras during their duty tour as some of the interventions taken to check  unprofessional acts on the part of the police.

“I would like to place on record that my Government and I are very delighted about these initiatives and look forward to their yielding good results for the good of the Service and the country,” he disclosed.

The Inspector General of Police (IGP), Dr. George Akuffo Dampare, in an address appealed to the public to make lands available for the establishment of police stations to promote security.

He said the most important commodity in the whole socio-economic development of every country is security.

However, he said “in most cases, security is relegated to the background and we do all things and after that we will be wanting and looking for security.”

Giving an example, he said, “A case in point is where lands are being shared for both developmental purposes, be it commercial or residential and nobody will factor in a place for a police station. They will share the whole piece of land and thereafter, they have no place for the police and yet they expect police to come to that community.

“And we are left in this case with no choice but to struggle with little space here and there in order to provide the policing infrastructure needed to maintain law and order.”

He assured the public that in the quest of the Police Service to become a world-class institution, it would up its game by portraying a high level of professionalism, ethical and humane attitude in order to win their trust which seems to have gone down over the past couple of years.

Elder Nana Amo Tobbin I, the Executive Chairman, Tobinco Group, in a speech said the project was part of the Group’s corporate social responsibility in giving back to the society.

He was optimistic that the facility would ensure that officers maintain professional standards at all times.

According to him, having a professional Police Service was key to maintaining law and order in the country because a professional police officer relates better to the citizenry, making policing quite easy.