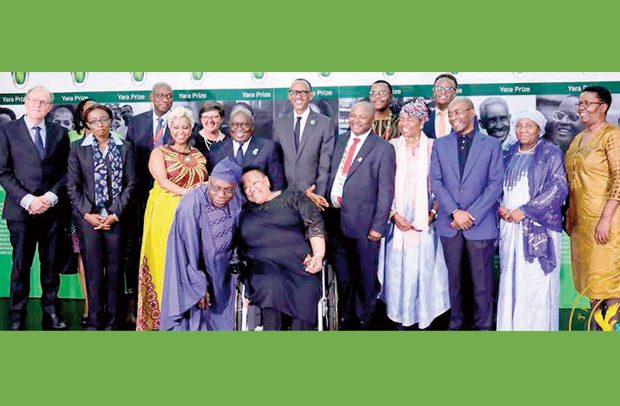 President Akufo-Addo has stated that the gains recorded in the agricultural sector were as a result of the introduction of policy interventions such as ‘Planting for Food and Jobs.’

He attributed the impressive 8.36% growth witnessed in Ghana’s agricultural sector in 2017 to effective policy-making and implementation by his government.

According to President Akufo-Addo, “When you look at where we were, and what has happened since that time, it’s largely because the policy has been properly aligned in my view.”

Speaking at the 2018 Africa Green Revolution Forum, a platform for global and African leaders to develop actionable plans that will move Africa’s agriculture forward on Saturday in Kigali, Rwanda, President Akufo-Addo revealed that between 2014 and 2016, Ghana’s agricultural sector recorded an average growth of 2.5%.

President Akufo-Addo explained that this situation meant that Ghana’s population growth of 3% per annum was outstripping growth in agriculture, resulting in deepening poverty and increased rural-urban migration, with its attendant social and economic pressures.

“Again, with the value of food imports into Ghana increasing from $344 million in 2007 to GH¢2.2 billion in 2016, the same amount of money we earned from cocoa in 2016, i.e. GH¢2.2 billion, was being used to pay for food imports. When that happens, you know it is as a result of policy failure” the President stated.

He told the gathering that “what we decided to do to revive Ghanaian agriculture was to devise a programme which we call Planting for Food and Jobs.”

The President of Rwanda, Paul Kagame, Vice-President of Kenya, William Ruto and the Prime Minister of Gabon, Emmanuel Issoze-Ngodet, were part of the panel at the event.

The ‘Planting for Food and Jobs’ programme, he added, is anchored on five main pillars-the provision of improved seeds, supply of fertilizers, provision of dedicated extension services, a marketing strategy and use of e-Agriculture.

Additionally, financial instruments such as the Bank of Ghana’s “Ghana Incentive Based Risk Sharing Agricultural Lending scheme,” with a fund of some GH¢500 million is targeted at reducing risks of investments and promoting agriculture financing”, the President explained.

The President stressed that the polices have led to an improvement in food crop yields.

“The end result has been a significant increase in agricultural output and productivity in 2017; our first year in office, 8.36% was our growth rate in agriculture. For me, the first and most obvious area of success has been policy-making and implementation,” he added.

Chinese IT Giant To Establish Headquarters In Ghana