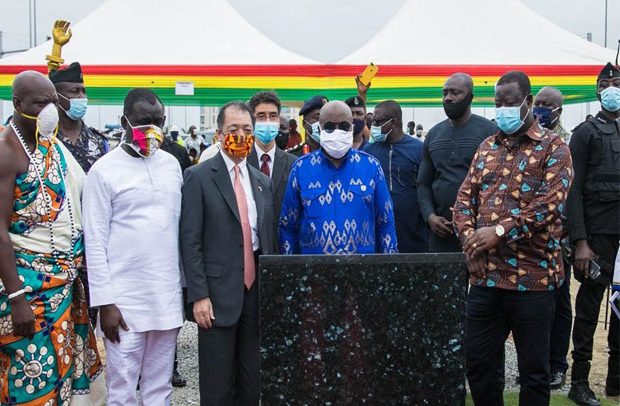 President Nana Addo Dankwa Akufo-Addo has ridiculed claims by former President John Mahama and his erstwhile National Democratic Congress (NDC) to have undertaken massive infrastructure development in the country when they were in power from 2012 to 2016.

“We know that the so-called unprecedented infrastructure development of the Mahama administration was fantasy, existing in the ‘Green book’ and not on the ground,” President Akufo-Addo pointed out.

He fired the salvo when he commissioned the first phase of the Tema Motorway Interchange project in Tema yesterday.

The programme was devoid of the usual fanfare that often accompanies such commissioning due to the observance of social distancing and protocols relative to the fight against the Covid-19 pandemic.

The newly commissioned project which comprises a two-tier intersection, a tunnel in the East-West direction, four kilometres of improved roads, four pedestrian bridges, one at each approach to the intersection, and the presence of several drainage structures was financed with a grant secured from the Japanese government to the tune of 6 billion Yuan – the equivalent of US$56 million.

It was started and completed within the contractual period of 28 months (from February 2018 to June 2020) and said to have created thousands of direct and indirect jobs for many young men and women and businesses in that catchment area.

The President paid glowing tribute to all who contributed to the successful completion of the project, with specific mention of Emperor Naruhito of Japan and Prime Minister Shinzo Abe and the people of Japan whom he described as ‘friends of Ghana’ for providing the facility for the construction.

In view of the fact that the provision of quality road infrastructure is considered an important tool to socio-economic development, the President said “government will ensure the even spread of such projects across the country.”

He indicated that government had secured funding for all road projects which he was anticipating would be completed before the end of this year.

Meanwhile, phase two of the Tema Interchange project is scheduled to commence in the last quarter of this year.

That is expected to see to the transformation of the parallel two-tier interchange into a three-tier one to hasten further the turnaround time at the intersection in the port city.

Other projects which have also been scheduled to take place within the enclave to ensure efficient use of the interchange include the construction of the 64.4-kilometre Ashaiman roundabout to Akosombo Junction road at the cost of 256 million Euros from the KfW IPEX Bank of Germany.

The project will witness the elevation of the current single carriageway of the Akosombo road into a multi lane dual carriageway with services roads, construction of interchanges at the Ashaiman roundabout to Asutuare Junction.

The dualisation of the 17-kilometre Tema to Aflao road project is also expected to cost $105 million and will tie the trans-African highway project from Lagos to Abidjan, while the current two-lane dual carriageway will be expanded into a three-lane carriageway per each direction.

There is also scheduled to be an expansion of the Accra-Tema Motorway into a three-lane dual carriageway with service roads under a Public Private Partnership (PPP) arrangement, with valuation said to have been completed awaiting approval from the PPP committee of the Ministry of Finance to engage the contractor.