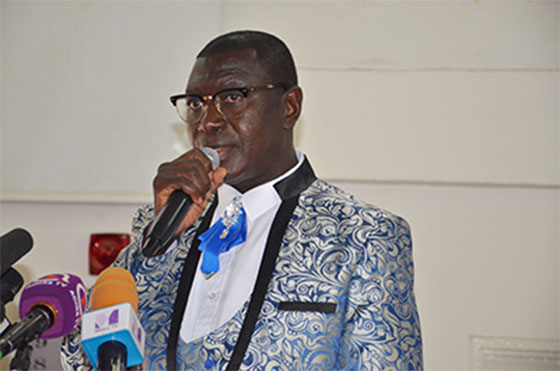 THE CHIEF Executive Officer of COA Herbal Centre, Prof. Samuel Ato Duncan, and other newly-elected officers of the Ghana Federation of Traditional Medicine Practitioners (GHAFTRAM),  were yesterday sworn into office.

The 22-member executives, who were sworn in by Justice Yonny Kulendi, a Supreme Court judge, at the Ministry of Health, were tasked to discharge their duties creditably and ensure that all practitioners of traditional medicines abide by the rules and regulations governing the sector.

Speaking at the event, Prof. Ato Duncan called on the government to consider traditional medicine, which he labelled as ‘Green Gold’,  as the natural resource that could turn around the economic situation of Ghana.

He observed that although Ghana had natural resources including gold, cocoa, and oil, it had not been able to maximise the full potential of such resources.

According to Prof. Ato Duncan, he has started pushing the ‘Green Gold Agenda’, which would soon be pursued by GHAFTRAM and was of the firm belief that traditional medicine had the potential of changing Ghana’s economic challenges, adding the country could rake in billions of dollars from it.

“A nation without enough resources tend to rely largely on loans. If the loans are not used prudently, repayment becomes a challenge, thereby leading to economic distress. This creates political and social insecurity, poverty, high unemployment rates and other social vices. In our case, we have more than enough resources. “However, we have been unable to maximise the full potential of these resources over the years. There is the need, therefore, for the Government of Ghana to find other commodities that can bring foreign exchange to support the economy,” he said.

The COA Mixture CEO assured President Akufo-Addo of his support to the government in finding a lasting solution to the current economic crises.

“It is our firm belief as a federation that if gold, cocoa, and oil have all failed in turning around the economic fortunes of our nation, we must look to what we call the ‘Green Gold’, the future of Ghana,” he said.

He continued that in the coming days, together with his executives, GHAFTRAM shall engage the various stakeholders in the areas of Medicine, Science, Technology, Research, and Entrepreneurship, among others, to brainstorm and map out a plan of action toward the implementation of the ‘Green Gold Revolution’.

“Ghana can rake in billions of dollars from Traditional Medicine. We have made some progress, and there is adequate evidence to support this position. However, there is more room for improvement. The Government of Ghana, through the Ministry of Health, has demonstrated its commitment to promoting the sector,” he said.

Prof. Ato Duncan observed that the total number of traditional medicine practitioners in Ghana was about 40,000. Unfortunately, only 3,890 were registered.

“I wish to assure you that we will work on bringing all on board.  We also hope to partner with various countries and institutions that have made significant progress in the manufacturing and administration of traditional medicine. We know China and India are far advanced in this direction,” he said.

He, therefore, appealed to the government, through the Ministry of Health, to increase the number of herbal units from 55 to cover all government hospitals in Ghana to expand coverage.

Representing the Minister of Health, Director of the Traditional & Alternative Medicine Directorate (TAMD), Dr. Anastasia Yirenkyi, admonished the new executives to work towards impacting the traditional medicine practice in the country.

“In Ghana, if you want to achieve a Ghana Beyond Aid, our focus must be on traditional medicine. My confidence is in the new leadership that they are going to provide jobs through traditional and alternative medicines,” she stressed.