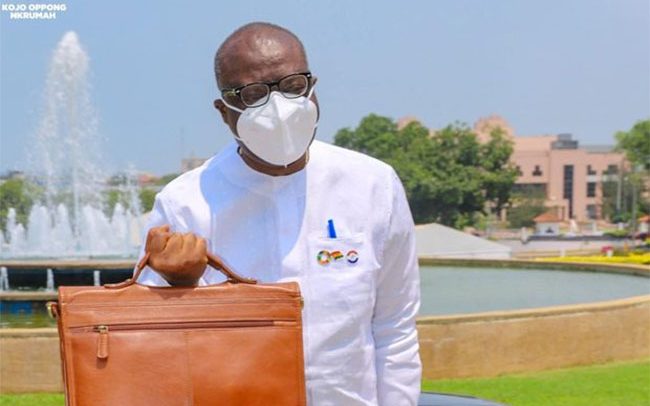 Embattled Finance Minister, Ken Ofori-Atta, is expected to present the 2023 Budget Statement and Economic Policy of the Government today in Parliament, barring any unforeseen hitches.

It follows a ‘gentleman’s agreement’ reached between the leadership of the New Patriotic Party (NPP)/ Council of Elders and the coalition of the party’s parliamentarians who have been demanding for the President to sack Mr. Ofori-Atta as a way to restore confidence in the country’s economy.

He has come under fire after the country went into an economic crisis, with inflation on a steep decline, while the cedi also continues to depreciate against the majority trading currencies.

The economic hardship, which has forced Ghana to return to the International Monetary Fund (IMF) for assistance, has caused protests from various quarters, with calls for the Finance Minister to resign.

Last week, Parliament’s ad-hoc committee began examining claims in a motion introduced by the NDC Minority lawmakers to dismiss Ofori-Atta, after accusing him of benefiting from the country’s economic woes through illegal payments and unethical contracts among others.

The Finance Minister has since fended off the criticisms, except saying he was “truly sorry” for the country’s economic hardship, while defending himself against accusations that he is unfit for the job.

“The people of Ghana are enduring hardships. I feel the pain personally, professionally and in my soul,” Ofori-Atta said.

And these were happening in the midst of demand by the ruling party’s MPs for him to be axed by President Akufo-Addo, who had earlier pleaded for him to stay on until the IMF negotiation.

Spokesperson for the NPP MPs, Andy Appiah-Kubi, said the lawmakers would not take part in any business of government and would boycott budget hearings until the demands are met.

This forced the leadership of the ruling party to organise a meeting to address the impasse of the parliamentary group on Tuesday, and they have since agreed to suspend their calls for the minister’s dismissal until after the conclusion of negotiations with the IMF.

A statement issued after the meeting said it was agreed by all to “refocus and recline” to the earlier position requested by President Nana Akufo-Addo for the Finance Minister to make the budget presentation on behalf of the President; and the subsequent presentation and passage of the Appropriation Bill.

“The meeting agreed that the President would act upon the Initial request of the NPP Parliamentary Caucus after the conclusion of these matters.

“The New Patriotic Party Caucus in Parliament have been urged by the Party’s executives to stand down on their demand for the removal of the Finance Minister, Ken Ofori-Atta, till after the 2023 Budget Statement is read and appropriated,” the statement noted.

“Leadership and the party in this regard call upon the Members of Parliament to attend to all Government Businesses in the House, including, in particular, the 2023 Budget Statement and Economic Policy and connected matters,” the statement concluded.

But unlike the Majority, the Minority NDC is insistent of its demand for Ken Ofori-Atta to be dismissed, expressing disappointment at the turn of events so far.

Minority Leader, Haruna Iddrisu, yesterday told the media in Parliament that they “feel let down and feel betrayed by the Majority Caucus who have shown no wit in supporting us with our impeachment process within the letter and spirit of Article 82 of the 1992 Constitution.”

According to him, the NDC is not abandoning its censorship motion, that opposition lawmakers were in it for the long haul.

He stated, “President Nana Addo Dankwa Akufo-Addo will go down in history under the Fourth Republic as the President who most disrespected a public opinion.”

“Because as far as we are concerned, public opinion is not supportive and favourable to the continuous stay in office of his failing, beleaguered lame-duck Minister for Finance, Ken Ofori-Atta.

“The country, probably, must run and will run, and will not necessarily be grounded to a halt by an irresponsible Minority. But we will watch the posture and conduct of our colleagues opposite and that will determine our body language. It’s early yet to determine what happens tomorrow,” he intimated.

“We are looking at the substance and not the form. We know that we have no faith and confidence in the Minister for Finance,” he posited.

It is not clear what will happen today on the floor of Parliament, with suggestions that the Minority might spring surprises, by resorting to boycott and hooting of the Finance Minister in protest.