Pupils of Mayeem D/A Primary Risk Dropping Out of School over Collapsed Classrooms, Lack of Furniture 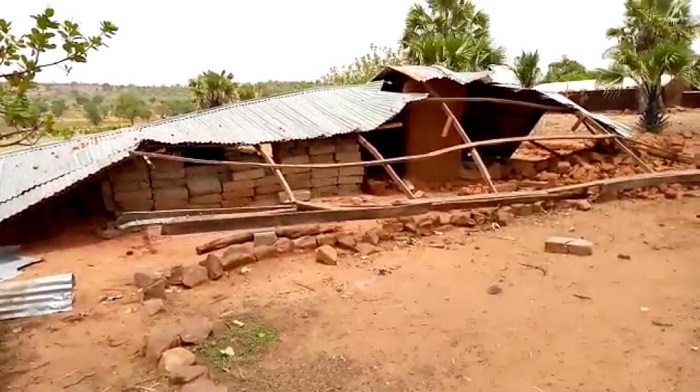 Pupils of Mayeem D/A primary at Bimbagu South in the Bunkpurugu-Nakpanduri district of the North East region risk dropping out of school due to the collapse of their classrooms.

A rainstorm on Monday dawn, May 2,2021 destroyed the Mayeem D/A primary school block which has been in a dilapidated state built with mud and a death trap to pupils.

The situation has compelled pupils to stay at home due to the lack of classrooms for teaching and learning to go on in the school.

A visit to the school by DGN Online showed pupils sitting under trees at the mercy of the scotching sun due to the collapse of their classrooms.

DGN Online gathered that throughout the week no teaching and learning has taken place in the school because they do not have a structure to accommodate the pupils.

The Mayeem D/A primary which was established in 1992 as a community school has not seen any renovation since it was constructed.

The entire school does not have a single furniture and lacks basic materials to enhance teaching and learning.

Currently, the population of the school from KG 1 to Primary 6 stands at 200. 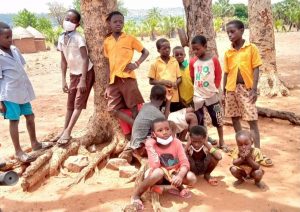 Pupils have been forced to sit on the floor while others sit on blocks.

Some of the pupils who spoke to DGN Online lamented about the situation in the school and appealed to government to go to their aid.

About five communities in the area depend on the school to ensure that children get access to education in the area.

The Headteacher of the Mayeem D/A primary school, Bilafanin David told DGN Online that the collapse of the classroom blocks and lack of furniture in the school have affected teaching and learning.

He indicated that pupils have dropped out of school after the collapse of the classroom blocks.

“ you do not have any temporal place for the pupils so we are in a dangerous situation and now we are in the raining and we cannot allow them to sit under trees so because of that most of the pupils have abandoned school and so it will be for the pupils to come to school without classrooms.”

Mr. David said the incident has been reported to the district education office but nothing has been done yet.

The Headteacher called on government and other organizations to come to the aid of the school to reconstruct their collapsed classroom blocks and provide them with furniture.

About 10,589 pupils enrolled in various primary schools in the Bunkpurugu-Nakpanduri district, 6,307 representing 59.6% lack of access to furniture, a situation that has compelled pupils to study on bare floors.

The kindergarten level in the Bunkpurugu-Nakpanduri district has about 3,804 pupils without furniture out of a total enrollment of 3,993 in the district.

The Sustainable Development Goal 4 which Ghana is signed onto calls for ensuring inclusive and equitable quality education and promotion of lifelong learning opportunities for all but the collapsed classrooms and furniture deficit among pupils of Mayeem D/A Primary School could deny them this opportunity.

Is There Culture Of Silence In Ghana ?