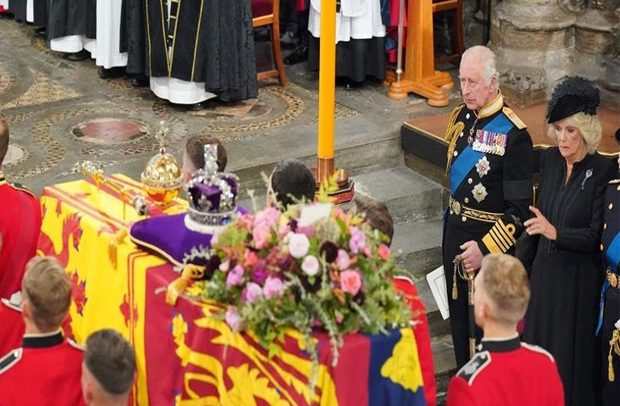 The Queen’s coffin has begun its final journey following her state funeral as the nation fell silent to honour Britain’s longest reigning monarch.

The King led members of the grieving Royal Family in a procession to Westminster Abbey, where world leaders were among the congregation at the hour-long service.

In a personal touch, the wreath adorning the Queen’s coffin had a handwritten note penned by the King, which read: “In loving and devoted memory. Charles R.”

The coffin is travelling through London, passing Buckingham Palace, before the Queen is laid to rest later next to her beloved husband, Prince Philip, at St George’s Chapel in Windsor.

Hundreds of thousands of people have travelled to London and Windsor for the funeral and burial service, which are being watched on television by millions around the world.

Some 2,000 mourners – including heads of state, prime ministers, presidents, and members of European royal families – gathered for the funeral at the abbey, where the first guests took their seats hours before the service started.

Emotional King at his mother’s funeral
Delivering the sermon, the Archbishop of Canterbury told mourners the “grief” felt around the world over the Queen’s death “arises from her abundant life and loving service”.

“She was joyful, present to so many, touching a multitude of lives,” the Most Rev Justin Welby said.

“Her Late Majesty’s broadcast during the COVID lockdown ended with: ‘We will meet again’, words of hope from a song of Vera Lynn.”

Queen’s coffin piped to Abbey
He added: “All who follow the Queen’s example, and inspiration of trust and faith in God, can with her say: ‘We will meet again’.”

Shortly after 10.35am, the coffin left Westminster Hall where the final members of the public queued overnight to see the Queen lying in state.

A grand military procession took the coffin to Westminster Abbey, with 98 Royal Navy sailors towing the 123-year-old gun carriage and the Queen’s children walking behind.

Inside the Abbey, the King and the Queen Consort walked immediately behind the coffin, followed by the Princess Royal and her husband Vice Admiral Sir Timothy Laurence, the Duke of York, the Earl and Countess of Wessex, and the Prince and Princess of Wales.

Prince George and Princess Charlotte walked with their parents in a side-by-side in formation, followed by their uncle and aunt the Duke and Duchess of Sussex and other members of the Royal Family.

Ahead of the service, the Princess of Wales could be seen holding Charlotte’s hand, and giving her a reassuring touch on the shoulder.

As the young royals walked behind their great grandmother’s coffin, Charlotte held her hands clasped in front of her while George had his arms by his side.

The Dean of Windsor told the congregation: “Here, where Queen Elizabeth was married and crowned, we gather from across the nation, from the Commonwealth, and from the nations of the world, to mourn our loss, to remember her long life of selfless service, and in sure confidence to commit her to the mercy of God our maker and redeemer.”

The wreath which adorns the Queen’s coffin includes flowers requested by King Charles and cut from the gardens of Buckingham Palace, Clarence House and Highgrove House.

State trumpeters from the Household Cavalry sounded the Last Post following the Archbishop of Canterbury’s commendation over the Queen’s coffin and a blessing pronounced by the Dean.

Two minute’s silence followed across the country before Reveille was sounded by the trumpeters. The national anthem was then sung by the congregation.

Crowds lining The Mall in London broke into spontaneous applause after the national anthem was played.

All public viewing areas for the funeral procession were full nearly two hours before the start of the service, London’s City Hall said.

The Queen’s final resting place will be the King George VI memorial chapel, an annex to the main chapel where her mother and father were buried, along with the ashes of her sister, Princess Margaret.

Philip’s coffin will move from the royal vault to the memorial chapel to join the Queen’s.

The Queen died on Thursday 8 September at the age of 96, bringing an end to the monarch’s 70-year reign and triggering a period of national mourning. 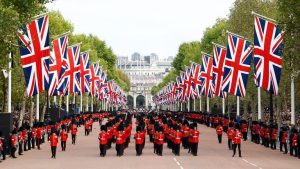 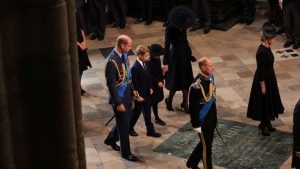 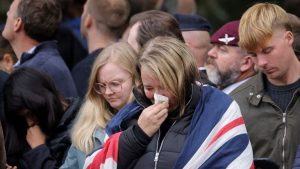