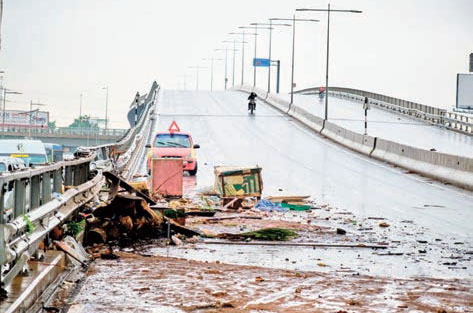 For the second time in less than a week, Accra was inundated with a torrential rain which stretched several hours.

Floods are usually recorded once during the perennial raining season. That has been the trend over the past years, not so this year as the nation’s capital suffered two major floods.

Uprooted trees and electricity poles were some of the sights which characterised the aftermath of the deluge.

Yesterday’s deluge left in its trail destruction of personal belongings and misery, the victims counting their losses in hundreds and in some cases thousands of cedis.

Some residents who feared for their lives abandoned their rooms for the outside, which proved safer than the four walled confinements.

Alajo, Kaneshie, parts of Tema and the Motorway were inundated with rainwater, and motorists especially were warned to keep away from some portions of the road network.

The security agencies, especially the Ghana National Fire Service, were on high alert for eventualities which are common at such times.

In the major drainage which separates Nima from Accra Newtown, another picture of damage was vivid as six or so cars lied in the large gutter covered with wilted grass and assortment of domestic waste.

Eyewitnesses were busy taking videos of the sight to be later transmitted as media contents.

The Greater Accra Regional Minister, Henry Quartey, the man credited with the region’s most ambitious ambience changing project, Making Accra Work Again, led a team from the Regional Coordination Council, National Disaster Management Organisation (NADMO) and others on an inspection tour of the affected areas.

In his Ayawaso Central Constituency where he is the MP, he saw clearly the extent of devastation and streets displaying patches of domestic waste. The spectacle was another reason the enforcement of assemblies bylaws should be carried to the letter.

Structures still obstruct waterways, a phenomenon which coupled with the climate change reality confronting the world were responsible for both flood situations in the past few days.

Accra’s topography, especially the area from the Alajo area towards Odawna and beyond to the Atlantic Ocean, experts say is flat, making flooding easy.

Records have it that in June 1959, Accra suffered one of its severest downpours in history.

Perhaps it was the downpour which compelled President Kwame Nkrumah to take the decision to relocate the inhabitants of Old Fadama to New Fadama in 196.

My Wife Is Gone Back To Europe- Patapaa Denies Divorce

'FOREST IN WILL PROBE'