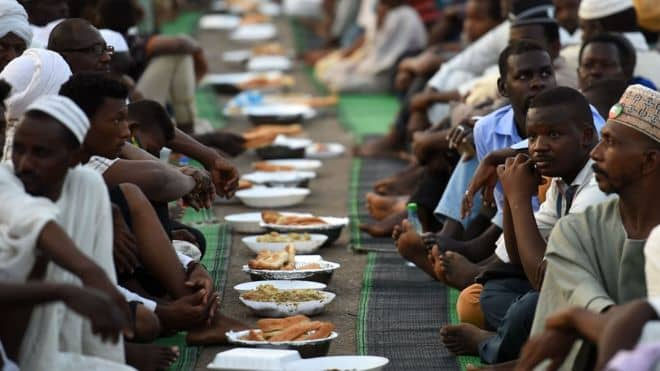 African journalists, Zeinab Mohammed Salih explains how Sudan’s protesters are managing to keep going during the Muslim fasting month.
More than a month since Sudan’s long-time leader Omar al-Bashir was arrested by the military, crowds are still camped out – day and night – in front of the army headquarters in the capital, Khartoum.

They feel the transitional military council is procrastinating about handing over power to civilian rule – and are determined that the energy of the sit-in is not diminished during Ramadan, when Muslims do not eat or drink between dawn and sunset.

A buzz can be felt around the vigil site directly after sunset when people gather for Iftar, the meal when the fast is broken.

Moments after the prayer to break their fast, the protesters start chanting: “A civilian government or a revolution forever.”

Another chant that often follows is: “I’m not going back, I have demands.”

Thousands start arriving – some bring their own food and drinks from home, others cook for themselves in huge pans at the sit-in.

Meals are also provided by women who put out calls on social media for volunteers to go to their homes to collect the food.

Many companies also take bottles of water or food in big trucks, so no-one at the sit-in goes hungry or thirsty at night.

protesters fear that the old guard will return to power
Then the time for speeches begins. Activists and ordinary people, who never dreamed of talking publicly, get up to address the crowds.

They talk about the alleged atrocities committed by the army and militias close to the former regime – and how their families have been affected.

Microphone in hand, they tell of things many people have never heard about.

Many of the speakers come from war-torn areas such as Darfur or South Kordofan.

Some tell of how they have been victims of the dam building in the north and have been forced from their homes.

Families of protesters killed during the demonstrations also speak.

All through the night people talk, raise awareness – wanting to make the protest count for something in the future.

Many more people now spend the night at the sit-in, whether they are sitting at the open-air cafes or sleeping on the ground or grass by the nearby railway line.

Scorching heat
Fewer demonstrators sit out the day in the stifling heat of Khartoum. Some people have donated mobile air-conditioning units to the protesters, but these can do little to ease temperatures that often peak at more than 40 degrees.