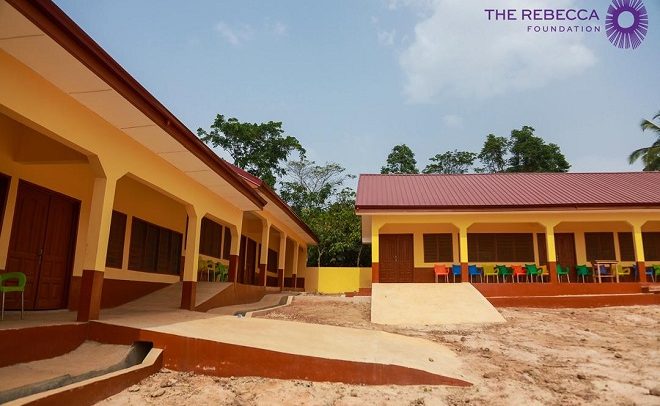 The Rebecca Foundation has re-built and commissioned the Adetim D/A KG and Primary School in the Upper West Akim District of the Eastern Region.

The project was revived after it was abandoned for twenty- nine (29) years by previous governments.

The new building will accommodate pupils from
class one to six, Kindergarten, a headmaster’s office and toilet facilities for both pupils and staff of the school.

He said the Rebecca Foundation is determined to assist the government in its quest to provide accessible, quality education to all who require it and has since its establishment in 2017 constructed several infrastructures including schools and libraries across the country. 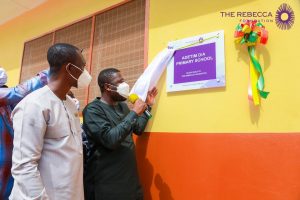 He urged the chiefs and leaders of the community to patronise the educational facilities in their community by ensuring that their children go to school and pay frequent visits to the library.

Expressing his gratitude to Mrs Akufo-Addo, DCE of Upper West Akim District, Eugene Sackey, said though the NPP government since assuming office has been working hard to provide educational infrastructure in the district including the Adesso, Presby KG and Primary School, and the Kwasi Nyarko JHS, benevolent efforts as exemplified by the First Lady will go a long way to complement government’s efforts in providing quality education for all.

On his part, Chief of Adetim, Nana Sekyere, said he still recollects the poor state of the school for several years with little expectation of it ever being completed, and expressed optimism that the reconstruction and expansion of the school will enable it to admit more pupils than before.

He promised to continue to drum home on the need for education as the principal tool to open the gate of enlightenment and wealth creation.