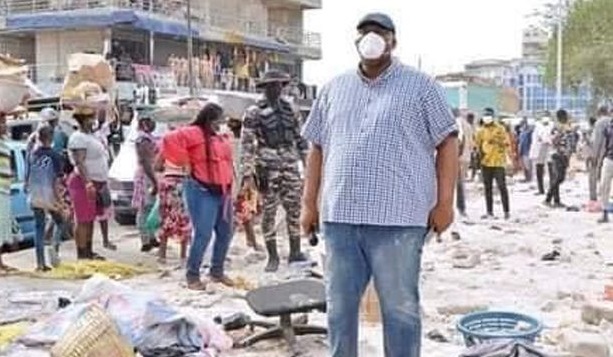 Greater Accra Regional Minister Henry Quartey is emphasising on the significance of nature and the need to protect the environment by planting more trees and preserve our forest, water bodies and the natural habitats.

He commended the Tema West Municipal Assembly to collaborate with the Forestry Commission and other key stakeholders to undertake the Green Ghana initiative to recover the municipality’s lost vegetation. Mr Quartey stated after joining stakeholders to plant seedlings at the Sakumo Ramsar Site, a wetland site in the Tema West municipality as part of the commemoration of the 2021 World Environment Day on the theme: “Ecosystem Restoration”.

About 10,000 seedlings are expected to be planted within the Municipality as part of a deliberate effort to preserve the Sakumono lagoon. The site of 1,400 hectares was designated as an internationally important wetland site in 1992 under the Convention on Wetlands of International Importance, a treaty negotiated under the auspices of UNESCO and signed in 1971 in Ramsar, Iran.

Over 70 water bird species, estimated to number 30,000 birds, depend on the Site’s resources during migratory and reproduction periods. Mr Quartey said it was required that governments, businesses and the general public put in efforts to address environmental issues with a further push for healthy ecosystems.

He said, since his assumption of duty as Regional Minister, the Regional Coordinating Council had initiated several initiatives to combat indiscipline in the city as one of the major thrust of his vision – “Let’s Make Greater Accra Work”.

“One of the major activities identified under this mantra is to green empty spaces in the city after decongesting and cleaning up various places of public interest to beautify the city and at the same time ensure that it regains its glory as the capital city of Ghana,” he emphasized.

Mr Quartey, called on the various Assemblies to collaborate with Civil Society Organisations, Environmentalists, Chiefs, students and all major stakeholders to reflect on the impact of human activities on the environment and act immediately to save it.

“I urge you to continue to play a vital role in maintaining biodiversity; conservation of the natural environment and restoring degraded lands in the municipality and particularly within the Ramsar site,” he said.

Ms Stephanie S. Sullivan, United States Ambassador to Ghana, who joined other Ambassadors to plant seedlings, said living trees absorb carbon dioxide-the most prominent of the greenhouse gases, and were a critical tool in the global fight against climate change.

She explained that, by taking carbon out of the air, trees helped to slow the rise in global warming, adding that forests were under threat on so many fronts.

She mentioned the rapid urbanization and the need for more housing for a growing population; the need for more agricultural land to feed more people, as some activities that were destroying the country’s forest reserve.

The World Environment Day is celebrated annually to draw attention to the importance of nature and the environment and also as a reminder that nature should not be taken for granted and must be given the needed respect for its values.

The other dignitaries were: Mohammed M. O Melad, Charges d’Affiars of Guinea and Lybia; Felipe Gonzalez Lugo, Charges d’Affiars of Mexico; Resident Representative of the UN and the programme Director of UNESCO; and Madam Helen Maku Obeng, the District Governor of District 418 (D418) of the Lions Club International (LCI).