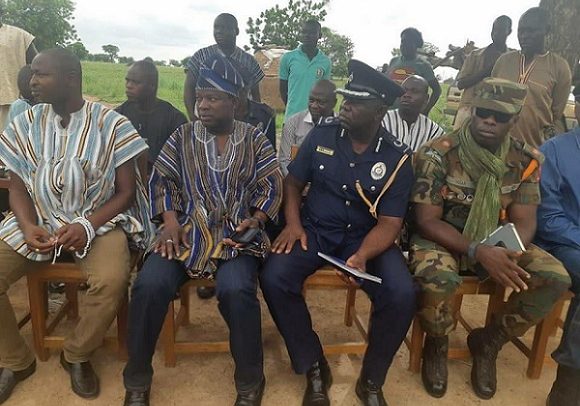 Salifu Saeed and REGSEC members at the Gbewa Palace in Yendi

The reconstruction of some portions of the Gbewa Palace in the Yendi Municipality commenced as part of efforts to hold the funerals of the late Yaa-Naa Mahamadu Abdulai and Yaa-Naa Yakubu Andani.

Per the peace deal, the Abudus would be given access to the Gbewa Palace to perform the final funeral rites of the late Yaa-Naa Mahamadu Abdulai, according to their customs and traditions.

The funeral rites would commence on December 14 and end on December 28, 2018 after which the Abudus would leave the Gbewa Palace peacefully.

The Andanis would also take their turn at the Gbewa Palace to organize the funeral rites of the late Yaa-Naa Yakubu Andani from 4-18 January 2019.

Mr Saeed and the REGSEC members also paid a courtesy call on Regent of Dagbon, Kampakuya- Naa Abdulai Yakubu Andani, Bolin Lana Mahamadu Abdulai and the Kug-Naa at their palace.

The respected chiefs pledged to ensure the holding of the funerals of the late Yaa-Naa Mahamadu Abdulai and Yaa-Naa Yakubu Andani.

Addressing the media, Mr Saeed said from all indications the contractor at the site has demonstrated professionalism and was optimistic the deadline for the completion of the project would be met.

The Minister expressed happiness with the support from the various chiefs.

“I will like to thank Kampakuya- Naa Abdulai Yakubu Andani, the Bolin Lana Mahamadu Abdulai and the Kug-Naa for their overwhelm support and they have indicated that they all want Dagbon to have peace.”

The regional minister appealed to residents of Yendi to cooperate with security personnel who would be deployed to the municipality.

The supervisor of the project, Yakubu Alhassan, told DAILY GUIDE that the work at the Gbewa Palace is 98 percent complete, adding that he would hand over the keys to the Municipal Chief Executive (MCE) of Yendi which would be given to REGSEC.

Meanwhile, several military and police personnel have been deployed to the Yendi Municipality to provide security.

3 Arrested With AK 47s In Kpandai