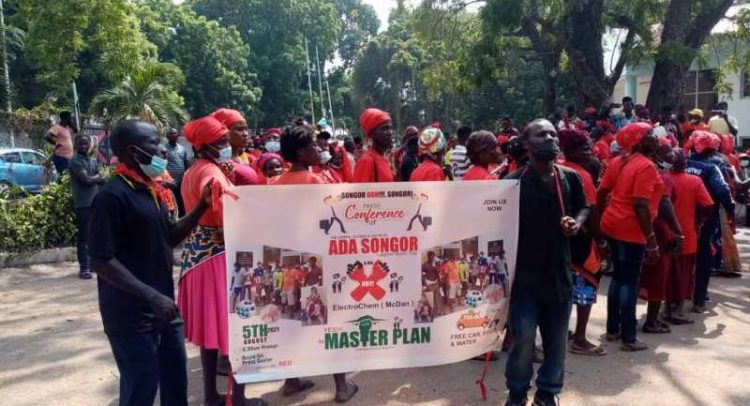 Some Residents in and around the Ada Songor Lagoon, in the Greater Accra region have called on government to review the agreement which granted monopoly to Electrochem Ghana to win salt in the Lagoon.

“A review of the terms of the Electrochem project and the implementation of a development approach in the vision of the Master Plan which legally accommodates the economic interests, including the right to salt production of local people,” the residents said.

Member of the Legal Team for the Residents brutalized by the Police and Military in the Ada Songor Area, Wayoe Ghanamannti, at a press conference in Accra called for the immediate halt to the use of security personnel to intimidate the people in and around the Songor lagoon.

The granting of monopoly to the Electrochem Ghana to control the operations of salt production in the Ada Songor Lagoon has generated a difference of opinion between supporters and opponents of the project.

Mr Ghanamannti said opponents of the project were arrested, brutalized and sustained various degrees of injury for defying the moratorium banning the community members from winning salt in the lagoon.

He said the most infamous incident was the killing of Maggie Kuwornu in May 1985, which set in motion a series of processes under the PNDC government and resulted in the development of the Master Plan and the passage of Ada-Songor Lagoon law, 1992(PNDC law 287).

The Plan was developed under the aegis of the Ministry of Lands and Natural Resources through a consultative process which involved the Songor communities and ASM Salt Producers and among others.

The Plan aimed to develop the maximum potential of Songhor Lagoon for the salt industry and reconcile the interests of the large scale and local small scale and co-operative salt producers and eliminate the contradictions that provoked conflicts among them.

Mr Ghanamannti said from the facts above, it was obvious that the use of the Military and the Police to brutalise and coerce the communities in the Songhor Lagoon was to put fear in them to forgo their economic rights and livelihoods dependent on the lagoon.

He said the mining lease according to the people of Ada did not take into consideration the economic plight of the locals whose sole livelihood depended on the Songor lagoon.

Mr Ghanamannti said the locals claimed the lease would not only take away their source of livelihood but deprive them of their lands, adding that anytime they were ready to fight the lease to the latter, government failed to heed to their request.
GNA