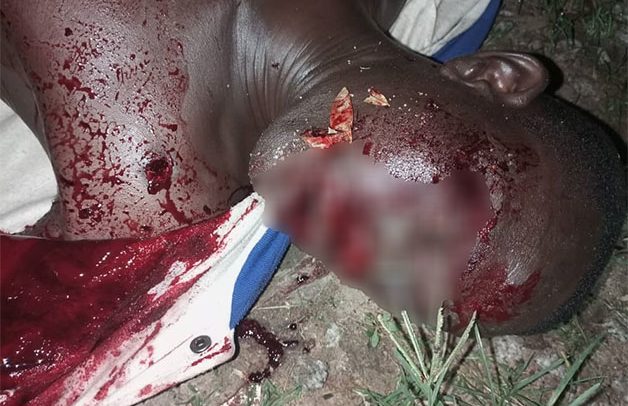 A FIERCE gun battle between a group of suspected armed robbers and one Johnson Kumbil on Saturday has led to the untimely death of one of the hoodlums.

This occurred when the suspected robbers, numbering about six, invaded Kumbil’s home at Afrancho around 2:30am, ostensibly to rob him of his valuables.

The robbers, who wanted to get access to the main hall of the house, started to fire bullets, perhaps to scare Kumbil, who was hiding in the bedroom, to surrender.

However, the fiendish plan of the robbers did not work as planned, as Kumbil, who was armed with a pump action gun, mustered courage and fired at the robbers.

In the course of the dangerous shooting battle, one of the robbers, identified as Valair Sonda, was hit and killed instantly as the other robbers fled the crime scene.

“On 9/04/22 at 02:36hrs, distress call was received from Kumbil Johnson of Afrancho that same day armed men, numbering about six (6) invaded his house and attempted to break into his main hall.

“They fired multiple shots in the air. That he also fired from his bedroom into them with his pump action gun and they dispersed,” an Afrancho police document pointed out.

The report further stated that, “He later came out from the room and found out that one of the men was lying dead at the main entrance to the house.”

The police are investigating the case.

The police proceeded to the scene and found a male adult aged about 40, lying dead in a prone position, wearing a multi-coloured jacket over a pink shorts.

“The body was carefully inspected and gunshot wound was found on the upper part of the left breast and blood oozing profusely,” the police document narrated.

It said the scene was further combed and six empty shells of AAA cartridges were found, adding that “The scene was photographed. Complainant detained and weapon retained for further investigation.”

The deceased, the report said, was later identified “as Valair Sonda, who lives behind the complainant’s house. Body was removed and deposited at the KATH mortuary for preservation and autopsy.”