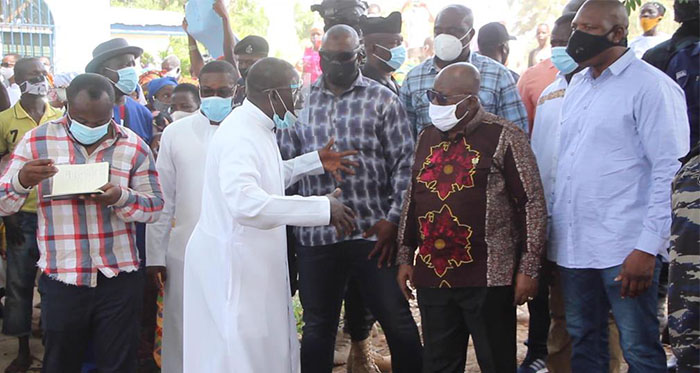 President Nana Addo Dankwa Akufo-Addo was the toast of residents of Egyam in the Ahanta West Municipality of the Western Region yesterday when he visited the area to inspect the progress of work on the Akyernyin to Egyam road in the region.

The road leading to the “Catholic Grotto”, a spiritual renewal centre, where the Catholics go to pray which has been in a deplorable state for many years is now being constructed by the New Patriotic Party (NPP) government.

Rev. Father Anthony Eshun in charge of the grotto, who welcomed the President at Egyam, could not hide his excitement for work being done when he told the people to renew the mandate of the President for another four years to be able to do more for the country.

He said that the road construction is part of the transformation currently taking place all over the country in the past three years that President Akufo-Addo has been in office. He added that the President should be given the chance to rule for long for him to do more for the country.

Besides, the Reverend Father said that since the grotto was constructed about 75 years ago, no President had visited the area except Nana Akufo-Addo.

He appealed to the President to help construct the Punpuni road also in the area which was being constructed by BOST but had been abandoned.

The President thanked the people of Ahanta West for their massive support for the NPP government and stressed “surely the road would see bitumen.”

He said even though the Covid-19 had adversely affected the economy, government was on course to ensuring that all road projects which had begun in the region would be completed as scheduled.

The Minister for Roads and Highways, Kwasi Amoako-Atta, who addressed journalists earlier, mentioned that 80 new road projects are currently ongoing in the region.

He said 27 of them are being supervised by the Ghana Highways Authority, 34 under Feeder Roads, and the remainder being managed by the Urban Roads Department.

“A total road network of 1,258 kilometres (km) would be completed in the ensuing months to add to the road infrastructure base of the Western Region,” he said.

He said the Takoradi PTC Interchange project would begin in September this year and disclosed that the Vice-President, Dr. Mahamudu Bawumia, is scheduled to cut the sod for the project in the first week of September, adding “all of these projects have advanced at various stages of completion.”

He revealed that the Western Region has a total road network of 5,289.7 km and that about 45 per cent of the roads were in a very deplorable state and needed to be upgraded.

The President and his entourage then moved to Axim to inspect the ongoing construction of the Fishing Harbour as well as the Sea Defence project there and also inspected the Esiama to Nkroful road and cut the sod for the construction of the 30.2-km Teleku Bokazo-Salman-Anubil Junction feeder road in the Ellembelle District.

The sod was also cut for the construction of the 38.16-km Santaso-Aidoosuazo-Kwesikrom-Prestea and the 20-km Santaso-Asomase-Basake feeder roads.

The President, as part of the tour, is also expected to cut the sod for the construction of a Gold Processing Plant at Aboso and also cut the sod for a 100-bed capacity district hospital at Shama.

He will cut the sod for the construction of the GNPC Operational Headquarters in Takoradi, launch the Gwira Community Mining project at Gwira-Anyinase and also meet with the Western Regional House of Chiefs.