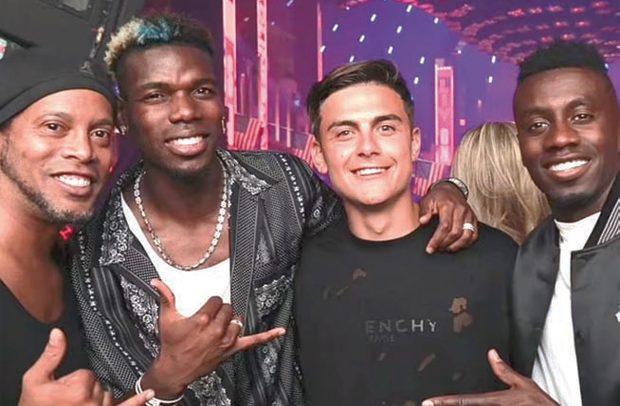 Paul Pogba, Paulo Dybala, Blaise Matuidi and Brazilian legend Ronaldinho were filmed embracing and joking as they partied together in Miami this week.

Pogba is currently enjoying some time away from football after competing in Euro 2020 with France before their shock last-16 elimination by Switzerland over a week ago.

The Manchester United star has jetted off to Florida with his wife, Maria Salaues, and their children before he returns for pre-season training, also spending time in Miami with some of his former team-mates.

Pogba was pictured with ex-Juventus colleague Dybala on Sunday, who is not in Argentina’s Copa America squad because of fitness issues, and then the duo were seen out and about enjoying the city’s nightlife.

It appears the pair are also spending time with former Juventus midfielder Matuidi, and the trio were later pictured hanging out with Ronaldinho in the famous Liv nightclub.

They posed for photos with the 41-year-old Brazilian star, the winner of the Ballon d’Or in 2005.

Pogba also uploaded a video of them chatting and joking around in the club on his Instagram.

Ronaldinho, who last year spent nearly six months in Paraguay over a fake passport scandal, is clearly having the time of his life in Miami.

The former Barcelona, AC Milan and Paris Saint-Germain star also posted a photo of him and Manchester City defender Benjamin Mendy in Story nightclub the day before.

Pogba, meanwhile, was filmed dancing and enjoying himself with singer Burna Boy earlier this week.

Pogba will be desperate to put the disappointment of France’s Euros exit out of his head after they were expected to win the tournament this summer.