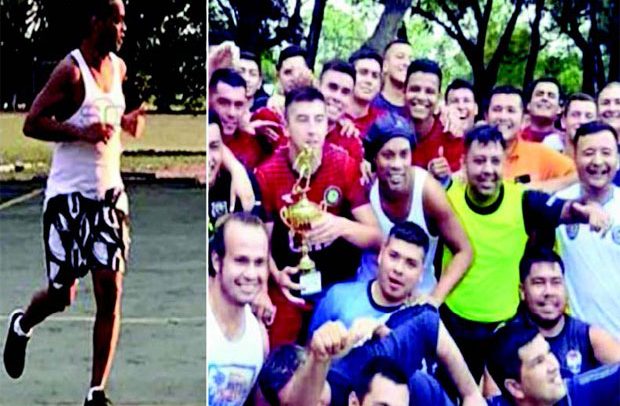 Football legend Ronaldinho remains behind bars in a Paraguay prison, though extraordinary images have surfaced showing he is back to doing what he does best and playing football.

The former Ballon d’Or winner was reported to be taking part in a five-a-side prison tournament in order to bring inmates together to compete for a bizarre prize of a 16kg suckling pig.

Pictures appeared of Ronaldinho featuring in the action, wearing a white vest and a pair of floral shorts along with Astro Turf trainers.

Sporting his trademark ponytail, the Brazil icon looked to be straight in among the action as the tournament got underway upon a small concrete pitch.

A later image then showed Ronaldinho surrounded by teammates, clutching a golden trophy.

The team boasting the former Barcelona and AC Milan superstar won the final match 11-2, with Ronaldinho scoring five goals and assisting the other six.

The 39-year-old was detained after being arrested for allegedly attempting to enter the South American country of Paraguay with a fake passport alongside his brother.