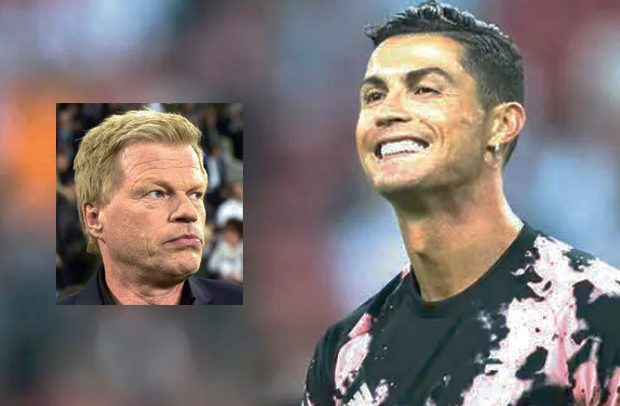 Bayern Munich have no intention of signing Cristiano Ronaldo from Manchester United this summer, with CEO Oliver Kahn stating that a deal for the 37-year-old would not “fit with our philosophy.”

Sources have told ESPN that Ronaldo has informed United bosses that he would like to move during the transfer window, with Bayern, Chelsea and Napoli cited as potential destinations.

But, according to Kahn, Bayern will not be making a move for the Portuguese great.

“As highly as I rate Cristiano Ronaldo as one of the greatest, a transfer wouldn’t be a fit with our philosophy,” he told German magazine Kicker.

Bayern’s attack has long been led by the prolific Robert Lewandowski, however the 33-year-old has told the Bundesliga champions that he wants to leave the Allianz Arena this summer.

Sources have told ESPN that Barcelona made a third offer for Lewandowski last week, worth more than €40 million. Kahn has publicly insisted that the Poland striker is not for sale.

United similarly insist that Ronaldo, who scored 24 goals last season, is not available for transfer and that new manager Erik ten Hag “wants and expects” him to be part of the squad next season.

However, sources have told ESPN that in reality that stance is softer, although they would prefer Ronaldo moved abroad rather than join Premier League rivals Chelsea. He has a year left on his contract at Old Trafford with the option of another year.

Ronaldo is keen to continue playing in the Champions League and competing for major honors in the late stages of his career. United missed out on qualification for Europe’s top competition and are again making a fresh start under Ten Hag.

Ronaldo was due to begin training with the rest of United’s international players at Carrington on Monday but was given permission by the club to take an extended break because of “family reasons.”

The squad are scheduled to fly to Bangkok on Friday but sources have told ESPN that Ten Hag does not yet know whether Ronaldo plans to train in Manchester this week or make himself available for the tour.

'Support Each Other In Africa'